SLC have made it clear that they won't play a part in jeopardising cricket's future.

With three days to go for the much-awaited International Cricket Council (ICC) meeting in Dubai on February 8, Sri Lanka Cricket have made it officially clear, through a media statement, that they are against the proposed overhaul of the ICC, citing the reason that they will never be in support of any plan of action that could jeopardise the future of global cricket.

The Lankan media was filled with reports suggesting this decision of the SLC since Tueaday, which was incidentally Sri Lanka’s Independence Day. The media has called this fight against ICC’s ‘Big Three’ a “war”.

“We fought brutal terrorists who were internationally powerful. But we fought them and defeated them despite international pressure,” an unnamed SLC official was quoted as saying by the Daily Mirror.

The official warned that unless they take a stand now, cricket will be destroyed if power is bestowed on a few countries. “They might even change the rules of the game to fit them. We have past examples. The bouncer rule was brought in by the then powerful England and Australia and wiped of West Indies cricket. In recent times, we know how India’s resistance has stopped DRS becoming law. There is a great danger lurking behind these proposals,” the top Lankan official added.

On Wednesday, the SLC statement read, “Sri Lanka Cricket wishes to announce that the executive committee met with all the stake holders, past captains, past presidents and secretaries of SLC and the sports ministry representative to discuss the ICC Revised Working Group Proposals at the Auditorium of the Ministry of Sports. The Revised Proposals put forward by the ICC, the views of the legal advisory committee and the financial evaluations were taken into consideration and discussed in detail. The views of the executive committee were expressed based on the above. It was explained at this meeting that the SLC executive committee was firmly of the view that all endeavours should be made to safeguard the current rights and privileges of Sri Lanka as a Full Member of the ICC. All present at this meeting were in unanimous agreement with the decision taken by the executive committee to oppose the Revised Proposals.”

The Sri Lankan decision is set to be a huge setback to the Board of Control for Cricket in India (BCCI), ECB and CA’s plans. The ‘Big Three’ need at least eight votes in favour of their proposal for it to be passed.

On Tuesday, Cricket South Africa also made itself clear in a press statement. “While we are engaged in discussions with the ICC and other Full members, including the BCCI, to find an acceptable way forward, we have not and will not consider deals that compromise our key principles and integrity. This is a difficult time for global cricket and attempts to mislead and create confusion are not welcome,” said CSA president, Chris Nenzani.

“CSA vehemently denies any notion of deals being made with any other party. On the contrary we will seek to uphold good governance and our professional approach to find solutions to the current proposals being considered by all the Member Boards.

“We have carefully considered the proposals and we have declared that we will engage further with the ICC and other Members to try and reach any consensus ahead of Saturday’s ICC Board meeting and that position still stands,” explained Nenzani.

On the other hand, BCCI president N Srinivasan said in an interview, “A strong India with a vibrant commercial structure is good for world cricket.”

It just remains to be seen how long Sri Lanka, Pakistan and South Africa can keep cricket’s big boys – India, Australia and England – at bay. The ‘fight’ is certainly going down to the wire. 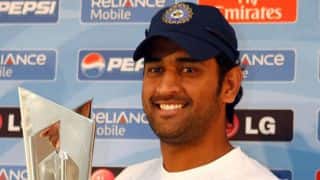