The BCCI confirmed that Mandhana will be available for selection from Sunday.

India batter Smriti Mandhana has recovered from a fractured toe and is set to join the India women squad ahead of the team’s second ODI against West Indies on Sunday. It was in early October that Mandhana picked up the injury while training ahead of the long series against South Africa, which forced her out of action for approximately 20 days.

Mandhana will be leaving for the Caribbean Saturday, stated a report on ESPNcricinfo, with the BCCI announcing that the left-handed opener will be available for selection from Sunday, November 3. Mandhana was swapped for allrounder Pooja Vastrakar for the South Africa series but since no replacement was named for the three ODIs and five T20Is against West Indies, it is believed that she was always expected to regain fitness soon.

During her time away from cricket, Mandhana focussed on her fitness and even posted a video of her first running session in her home town of Sangli. Mandhana turning to the National Cricket Academy (NCA) where she underwent intense rehab. Recently, Mandhana had also posted on Instagram pictures of her cooking, calling it her “relaxing therapy”.

Mandhana, vice-captain of the women’s team, has been in prolific ODI form since the beginning of last year, scoring 1018 runs in 18 matches at a stunning average of 67.86, strike-rate of 90.97 while scoring two centuries and 10 half-centuries.

After a decent season in the KIA Super League, tallying 268 runs in 11 innings for Western Storm, Mandhana underwent a rare and uncharacteristic slump in form in the ODIs against South Africa women. In four matches, the opener managed only 46 runs even though India women secured the series 3-1.

Shortly after being named ODI Player of the Year in the ICC awards in 2018, in January this year, Mandhana climbed to the top of the ODI rankings. She struck her fourth ODI century in Napier before scoring an unbeaten 90 in Mount Maunganui when India won the ODI series 2-1 as part of the ICC Women’s Championship.

Between January 2018 and February 2019, Mandhana emerged as the highest-run scorer with 865 runs from 15 innings at an average of 72.08 and strike rate of 93.11. Of these, an impressive 57 percent of runs were scored in boundaries with 102 fours and 14 sixes.Smriti Mandhana Set to Join India Women Ahead of 2nd ODI Against West Indies 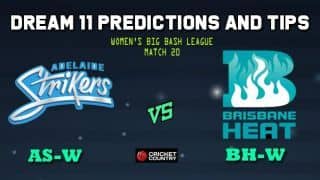