Somerset needed only 78 to win, but Maharaj stopped them with 7/37.

The pitch at County Ground, Taunton had been criticised by the cricket fraternity after 22 wickets had fallen on Day One during the match between Somerset and Lancashire. The remaining 18 fell on Day Two but this time nobody complained, for Keshav Maharaj bowled out Somerset to ensure the match ended in a thrilling tie. Maharaj bowled unchanged for his 13.4-4-37-7. This was the first tie in the County Championship since the Warwickshire–Essex match of 2003, at Edgbaston (the one before that had taken place in 1987).

Lancashire started the day on 7 for 2 after conceding a first-innings lead of 93. There was turn in the pitch on Day One. Somerset had opened bowling with Jack Leach in the second innings yesterday, and Leach had repaid them with 2 for 0. He bowled unchanged today, to finish with figures of 26.5-9-74-7. The match figures of 12 for 102 are his career best.

Lancashire quickly became 24 for 4 on the final day, with Craig Overton striking twice. Then Steven Croft held the fort as captain Liam Livingstone hit out for a run-a-ball 39 (36 of these came in boundaries). And yet, when Dane Vilas fell for a duck, Lancashire still needed 3 to make Somerset bat again.

Croft pushed the score along, though the target would have looked puny, had Danny Lamb (20*) and Graham Onions (18 off 8, all of them in boundaries) not added 24 for the last wicket. Even then, Somerset were left to chase a mere 78.

The initial blows came from Onions, who removed the two biggest threats Marcus Trescothick and Azhar Ali off successive deliveries. Then Maharaj struck twice: first, James Hildreth was tried to cut and was bowled; then Vilas stumped captain Tom Abell swiftly. Onions trapped Steven Green leg-before and debutant Ben Green who had seen all five wickets fall at the other end was caught off Maharaj at second slip.

Lancashire sniffed victory at 37 for 6, but were defied by Lewis Gregory (12) and Dom Bess (19), who added 19 for the seventh wicket. Then Maharaj slid one through to catch Gregory on the crease, and did the same to Craig Overton.

Somerset needed another 14, but 13 of these were taken care of by Bess and Jamie Overton, twin brother of Craig. Then Bess, in an effort to seal things, stepped out to Maharaj and was stumped. That ended the over. After Onions bowled a maiden to Overton at the other end, Leach kept three balls out with the tension mounting.

Most captains would have had all fielders close to the bat at this stage, but Livingstone parked one of them outside Tom Bailey, at deep mid-wicket. That was exactly where Leach hit the next ball. 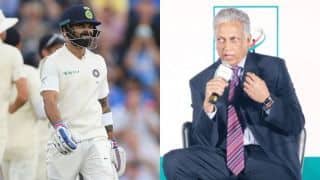 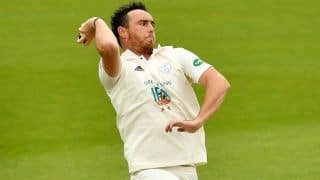