Currently, Bangladesh are 19 for the loss of two wickets in four overs against India in 1st T20I at Asia Cup T20 2016.

Bangladesh opener Soumya Sarkar was dismissed for mere 11 by fast-bowler Jasprit Bumrah after being caught behind by MS Dhoni, against Bangladesh in the first Twenty20 International (T20I) of the Asia Cup T20 2016 at the Sher-e-Bangla National Stadium in Mirpur, Dhaka on Wedensday. It was a short pitched delivery as Soumya looked to defend it with a straight bat, but the extra bounce took a leading edge toward Dhoni, who completed the catch. Currently, Bangladesh are 19 for the loss of two wickets in four overs with Sabbir Rahman on three and Imrul Kayes on four. FULL CRICKET SCORECARD: India (IND) vs Bangladesh (BAN), Asia Cup 2016 T20 Match 1, Dhaka 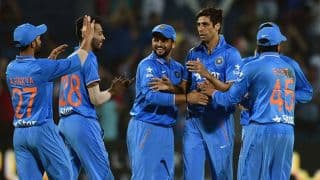