Former India captain Sourav Ganguly on Monday joined Bishan Singh Bedi and Dilip Vengsarkar in opposing the proposal to abolish the toss from Test cricket. Opinion has been divided among former cricketers since a newly-formed committee of the International Cricket Council (ICC), one that includes ex-international cricketers and coaches, elite panel umpires and match-referees, has mooted the idea of doing away with the toss in Test cricket.

“It remains to be seen whether it is implemented or not. Personally, I am not in favour of toss abolition,” Ganguly told reporters here. If toss is done away with, the game’s global governing body will alter a 140-year old tradition of the game, all in the name of protecting the five-day format’s following. The committee headed by former India captain Anil Kumble will debate whether or not the toss should be removed in an attempt to reduce home advantage held by the host team.

This will be discussed in an ICC meeting in Mumbai later in the month. Asked about home advantage, Ganguly said, “If the home team loses the toss, the advantage does not stay.” Former Australia captains Ricky Ponting and Steve Waugh have backed a move to scrap the toss, while West Indies pace great Michael Holding and former Pakistan captain Javed Miandad also felt it would encourage an even contest between bat and ball. 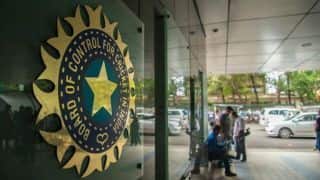