Pele is on a three-day tour to Kolkata, where he will be revisiting the historic Eden Gardens ground.

Kolkata: Former Indian skipper and Atletico de Kolkata co-owner Sourav Ganguly has expressed his delight over Pele’s visit to India, saying the latter’s presence in India, and particularly in Kolkata, is what holds great importance at this stage. “He is an absolute legend, extremely happy that he has come here. He is 75 years of age so you don’t expect him to show skills at this stage,” Ganguly told media here.” While expressing his tribute to Pele, the 43-year-old said that every sport needs a legend like him. “Every sport needs one. He is 75-year old and he is still so popular because of his achievements. I think every sport every country needs a successful person who can take the sports to the world,” he added. Eden Gardens drainage fiasco forces CAB to take hurried measures for ICC World T20 2016 final

Pele is on a three-day tour to Kolkata, where he will be revisiting the historic Eden Gardens ground, where the city’s football fans had seen Pele playing in a friendly exhibition match for American side New York Cosmos against local powerhouse Mohun Bagan in 1977. On Tuesday, Pele will be the guest of honour at the Indian Super League (ISL) defending champions Atletico de Kolkata’s home game against Kerala Blasters. Pele won three World Cups as a player and has been named Football Player of the Century by FIFA, Athlete of the Century by the International Olympic Committee and a national treasure by Brazil’s government. India vs South Africa 2015, 3rd T20I wash-out at Eden Gardens concerns Sourav Ganguly

On the other side, PTI earlier reported that Ganguly seemed to be deeply concerned with the Eden Gardens drainage fiasco and was seen talking to chief curator Prabir Mukherjee’s assistant Shankarshan Pal and the groundsmen. “He was telling them to get the ground ready for the upcoming Ranji Trophy 2015-16 match (against Rajasthan) from October 15,” a CAB official said. 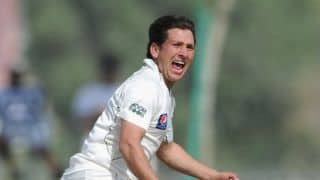