Former Indian skipper Sourav Ganguly has joined in the long list of players to name their cricketing all-time XI. Ganguly, who is one of India’s most successful skipper, has chosen arguably the most unbiased side among all the individuals. His XI includes four Australian’s, two Sri Lankans, two South Africans, two Indians and a sole Englishman. The ‘Prince of Kolkata’ goes in with six batsmen, one all-rounder and four bowlers combination. England’s current Test skipper Alastair Cook and Matthew Hayden will open the batting in Dada’s side. After that, though, it gets really interesting. ALSO READ: Sachin Tendulkar, Test cricket’s highest run-scorer, bats at No. 6 in Matt Prior’s all-time XI

Ganguly has chosen Ricky Ponting, Rahul Dravid, Sachin Tendulkar and Kumar Sangakkara for the middle-order. Among the lot, Dravid was selected by Dada to play in at No. 3. Unsurprisingly, Tendulkar was slotted to play in at No. 4, the position he made his own while donning India’s jersey in Tests.

At No. 5, Ganguly made his most surprising call, picking South African great Jacques Kallis. After him comes the wicketkeeper of the side, Sangakkara. Rounding off the middle-order will be Ricky Ponting. The former Australian player was chosen as the skipper of the side, but his position in the batting order is definitely questionable on the first look.

But Dada backed his decision, stating it necessarily wouldn’t be the batting order. He also termed Ponting as an ‘automatic choice’.

After that, he went in with two pacers and two spinners. Australian great Glenn McGrath and South Africa’s Dale Steyn were chosen as the new-ball bowlers. And the final two spot went to the spin duo of Shane Warne and Muttiah Muralitharan. 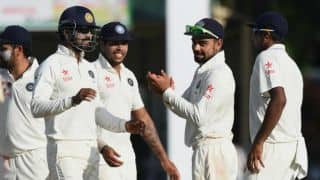 Spotted: A ‘Game of Thrones’ devotee at Galle