Ganguly was there when the juniors faced the selection panel and apparently left the room just as Shastri was about to appear.

Ravi Shastri feels that Sourav Ganguly has shown disrespect to the process of selecting the national chief cricket coach by staying out of the interview board when he made his presentation while the latter has hit back questioning why he was not present in person. Both used words that could have been kept out of civil conversations, but each wanted to prove that the other was cheeky. Understandably, Shastri is disappointed at not getting the job after, in his own words, making a decent job of it as India‘s team director in the “difficult last 18 months”. The board’s advisory committee of Sachin Tendulkar, Sourav Ganguly and VVS Laxman, with former board secretary and Madhya Pradesh captain Sanjay Jagdale as convenor, felt that former captain Anil Kumble was better suited for the job than Shastri and others who had applied. Ravi Shastri vs Sourav Ganguly: Sanjay Manjrekar, Bishan Singh Bedi speak out

In the whole episode, the board has come out in a poor light. It could have avoided the controversy by simply asking Shastri and Ganguly to choose a time convenient to both, more so when the candidate is hooked on a teleconferencing link just as a key member of the committee Sachin Tendulkar was. Whatever happened to the media team of the board with high-profile men manning it? It is their job to tell the media about the process. There was so much of speculation as to who all faced the interview board. Also the guesswork whether Kumble applied before the June 10 deadline for receiving applications was avoidable if only the media committee had released the shortlist of 21 — if not the full list of 57 applicants.

By all accounts, the most impressive credentials should have been that of Australian Tom Moody, but over the years the board has developed aversion to foreign coaches bringing their own support staff, ignoring the claims of Indians — some of whom were perceived to be better than those brought in. That left Shastri and Kumble as Sandip Patil would not have got the nod of all three members because of past baggage or the board may have told him to keep off as he is the chief selector. Sourav Ganguly: Ravi Shastri should have shown bit more maturity

Ganguly was there when the juniors faced the selection panel and apparently left the room just as Shastri was about to appear. Here the system collapsed to give yet another stick to the Supreme Court to thrash the board and insist on implementing the Rajendra Mal Lodha Committee recommendations for overhauling the governance. The statements of both Shastri and Ganguly, known for their leadership qualities, came out as pretty immature even if their dislike for each other is too well known to some.

Yes, Shastri is believed to have pipped Ganguly to the post last time and the undercurrent naturally was evident when both were involved in different capacities this time. There is a school of thought that believes that Ganguly did not lose out the last time because of Shastri’s manipulation, but he was told that he was badly needed to run the Cricket Association of Bengal in view of the deteriorating health of Jagmohan Dalmiya.

Just as Shastri is acceptable to Mahendra Singh Dhoni, the limited-overs captain, and Test captain Virat Kohli, the two India skippers like Kumble just as much, so it was a toss up between the two. Now the logic comes into play. Two of the selection panel members shared the dressing room with Shastri as players in their formative years while all three played alongside Kumble. So there can’t be any real bad blood among them.

Going just by the personal liking, Tendulkar should have gone with Shastri, who was the go-between him and the late Mark Masceranhas, his first marketing agent who promoted him in a big way. But that does not mean he would have argued against Kumble. The board president cannot talk like a politician, saying that the whole exercise of selecting the new coach was transparent without revealing that Ganguly was not present when Shastri was interviewed. It was left to Shastri to come out with the important information.

Sadly, even active cricketers have jumped in to express their views. When the board carries all sorts of inspired interviews with cricketers on its website, denying hard-working reporters access to them, how come it is in such a munificent mood to allow players to attack the protoganists dissecting their qualifications for the job? All those who sang paeans in praise of Shastri are now gung ho about taking the field under Kumble. The batsmen think Kumble, as a bowler, is in a better position to help them and the bowlers feel their ability will go up a notch under his attentive eye. The way to go in Indian cricket! 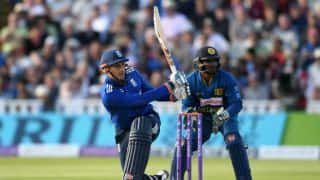