As Ganguly ticks another year and turns 48, let us look at 10 of his best international knocks.

Popularly known as the Prince of Kolkata, former India skipper Sourav Ganguly has entertained fans for a decade and a half. Currently, the BCCIchief, he has led India to memorable victories in his lifetime. He is also credited for backing youngsters like Harbhajan Singh, Yuvraj Singh and Zaheer Khan. It is also believed Ganguly was the one who pushed a young MS Dhoni’s case as the then skipper of the Indian team – at a time when experienced wicketkeepers like Dinesh Karthik and Parthiv Patel were available.

As Ganguly ticks another year and turns 48, let us look at 10 of his best international knocks.

After having had a good campaign in Nairobi, India was facing a formidable South African unit. India opener Sourav Ganguly scored a scintillating 141 off 142 balls to help his side post a decent 295 for six in 50 overs. The knock not only helped India win the match and seal a final berth, but the inning was rated among the top knocks by Wisden.

Sourav Ganguly smashed 183 off 158 balls – the innings comprised of 17 fours and seven sixes- to help India post a mammoth 373 for six in 50 overs and won the match with a huge margin.

It was a big occasion -the Natwest Series final – Ganguly once again stepped it up with a quickfire 60 off 43 balls to give India the perfect start, chasing a daunting 325 to win.

Ganguly, batting at three, scored a crucial 82 off 83 balls. But despite his efforts, India lost the match against Australia.

This came in the third ODI against the hosts – two years after creating history at the same venue against the same team. Ganguly once again showed why he is rated as one of the best limited-overs cricketers. It was a gritty 90 off 114 balls from the India skipper. His inning was laced with five fours and three sixes.

Ganguly led from the front, sending a statement across to the hosts that India is not scared. On a difficult pitch at Brisbane – with the ball swinging and seaming, Ganguly played one of his best knocks, scoring 144 in the first Border-Gavaskar Test of the series.

Till then, a double century eluded the Prince of Kolkata, but it happened and against Pakistan. He looked unstoppable as he scored 239. He batted for 518 minutes and 361 balls and his inning comprised 30 fours and two sixes.

On his debut, he made the world stand up and take notice when he became the only Indian and the third cricketer ever to slam a maiden ton on debut in Test cricket at the iconic Lords.

India was reduced to 56 for four and they needed someone to steady the ship and take the innings forward – Ganguly came to the rescue with a gritty 75 not out and it took 227 balls and 290 minutes. India won the match by a close margin. 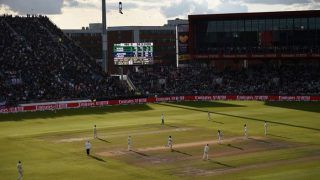