Sourav Ganguly has an eye for talent.

Sourav Ganguly has an eye for talent. Under his captaincy, the likes of Virender Sehwag, Yuvraj Singh, Harbhajan Singh, MS Dhoni among many others flourished. The former Indian captain is currently in New Zealand as a part of ICC’s commentary panel for the Under-19 World Cup.

India got off to a winning start in the tournament at Mount Maunganui. The Prithvi Shaw-led unit defeated Australia by 100 runs. Batting first, India posted 328 and shot out Australia to 228. Pacers Shivam Mavi and Kamlesh Nagarkoti picked 3 wickets each while Ishan Porel had to walk off the ground due to an injury. The pace trio caught Ganguly’s eye for their consistent ability to clock in the 140s kph, and he believes they are the best pacers in the tournament.

Ganguly, who is also a part of India’s Cricket Advisory Committee (CAC), tagged fellow members and his former teammates VVS Laxman and Sachin Tendulkar, alongside BCCI and Virat Kohli to let his thoughts known.

While Nagarkoti has appeared in 6 List-A matches for Rajasthan, the leader of the pack Porel has played 3 First-Class and 3 List A matches for Bengal. 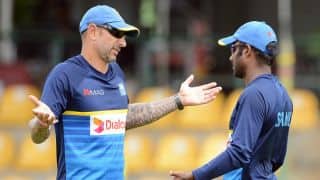