The decision to drop Duleep Trophy was unilaterally taken by a top BCCI official, contrary to decisions taken by the technical committee headed by Ganguly.

The Committee of Administrators (COA) today instructed BCCI not to scrap the Duleep Trophy from the domestic calendar after the tournament was removed, keeping technical committee chairman Sourav Ganguly in dark. “The Duleep Trophy has been restored. It will be held and logistics will be worked out. We have told BCCI not to scrap it. It should be there. It is a very prestigious tournament and it should be held. It will be held this season,” COA members Diana Edulji told waiting media persons. ALSO READ: Harbhajan, Ganguly concerned over Ashwin, Jadeja s ODI future

The decision to drop Duleep Trophy was unilaterally taken by a top BCCI official, contrary to decisions taken by the technical committee headed by Ganguly. It was decided at the technical committee meeting in Kolkata last month that the BCCI will continue with their pink ball experiment that started during the previous season. However, when BCCI released domestic fixtures for the season few days back, Duleep Trophy was not scheduled.

Ganguly in fact shot off a letter to BCCI General Manager MV Sridhar asking why the First-Class event has been scrapped. The PTI is in possession of the letter written by Ganguly to former Hyderabad captain. “I am reading in the media that Duleep Trophy has not or may not take place this season. I don’t know that’s true or not but if you remember, the members of the technical committee had agreed to use pink balls again for the Duleep matches and the tournament was supposed to be held in the same format as last year,” Ganguly wrote to Sridhar in an e-mail accessed by the PTI.

It was learnt that Ganguly also suggested that tournament may be held in Hyderabad or any city in southern India considering the ongoing monsoon in parts of northern India.

“Initially, there were suggestions that the matches be held in Mohali or Dharamsala but inclement weather might play spoilsport. That’s why Sourav suggested any city in southern India. The proposal is being carefully considered,” a senior BCCI official informed on conditions of anonymity.

IPL chairman Rajiv Shukla apparently wants UPCA to host the Duleep Trophy matches at its newly-constructed stadium in Lucknow. However, hosting Duleep Trophy in a choc-a-bloc calendar will be a challenge for the BCCI brass and have to find two weeks in September for the tourney. The New Zealand A team is supposed to come on a four-week tour to India from the end of September, where they will take on India A.

As per the itinerary, New Zealand A will be playing two four-day matches against India A in Vijaywada from September 23-26 and September 30-October 3. The five-match ODI series will be held in Visakhapatnam. All the matches will be day-games and will be played on October 6, 8, 10, 12 and 14.

The BCCI official then cited that how top domestic players may not be available for the Duleep Trophy.

“The top Indian players will be gearing up for the Australia limited overs series and the second rung will be preparing for the New Zealand A series. You won’t have the top 30-32 players playing. The players available will be the next 30, who will not remotely be in contention for national call- up,” the official said. 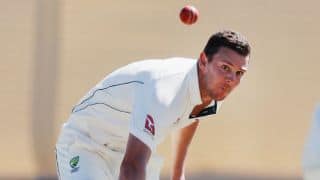