Cricket South Africa announced their 16-man squad for the Test series against Australia on Monday morning. South Africa have made some drastic decisions as they include two uncapped players Tabraiz Shamsi who took 3 for 36 against Australia in the fourth One-Day International (ODI) on Sunday. Apart from him, Keshav Maharaj, who took 13 wickets in a franchise match for KawaZulu-Natal Dolphins last weekend, also joins the club. But South Africa have found respite with Morne Morkel returning to the squad after his prolong injury. However, they have benched out their spinner Dane Piedt, who was their first choice amongst the spinners against New Zealand series. FULL CRICKET SCORECARD: South Africa vs Australia, 1st Test at Perth, Australia

Australia struggled to get any runs and were bowled out in the fourth ODI with the help of Shamsi bowling expertise. South Africa’s selector Linda Zondi told cricket.co.za, “We are following a horses for courses policy as we feel that spinners who turn the ball away from the right-hander are going to be particularly useful under Australian conditions and against the Test batsmen we are likely to face. With Ab de Villiers struck with injury, Faf du Plessis will continue to lead the 16-memder squad.

Dean Elgar also returns from injury while another uncapped player, Rilee Rossouw, has been added as a specialist batsman. Dane Vilas will again travel as the second wicketkeeper after making his Test debut on the sub-continent last year. Speaking on the new spinners, Zondi said, “Shamsi has made huge progress over the course of the last year in the longer format. He took 41 wickets at an average of less than 20 in seven matches in last season s Sunfoil Series and he certainly offers something different as an attacking spinner. Maharaj is also right on top of his game. He took 13 wickets in the Sunfoil Series match at the weekend and also made a run-a-ball 72.” ALSO READ: Why Australia s decision to rest Steven Smith is justified 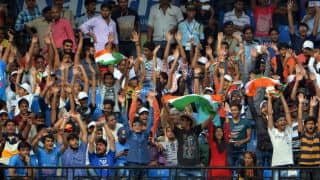