South Africa won all the matches against Bangladesh so far on this tour and will face the visitors for the two T20Is which follow.

South Africa pulled off a 3-0 in the ODI series against Bangladesh, winning the final match by 200 runs. At the Buffalo Park, East London on Sunday, brilliant batting by top order helped the hosts put up 369 for 6 at the end of their 50 overs. Later, the bowlers remained equally efficient as the batsmen, restricting them at 169. With this, South Africa won all the matches against Bangladesh thus far on this tour and will face the visitors for the two T20Is which follow.

Winning the toss, Faf du Plessis opted to bat. Temba Bavuma and Quinton de Kock started things off perfectly for South Africa, putting up a 119-run opening stand. Mehedi Hasan Miraz broke the partnership, sending Bavuma back for 48. He struck again soon to remove de Kock for 73. However, Faf du Plessis and Aiden Markram put the responsibility on their shoulders and built the second big partnership that added in excess of 100 runs. All the South Africa batsmen were immensely confident and comfortable batting against Bangladesh bowlers and the runrate kept increasing. The du Plessis-Markram partnership added 151 runs before the skipper pulled a muscle.

He was compelled to leave the ground, retiring hurt for 91. In the very over, Markram was run out by Imrul Kayes courtesy a brilliant direct throw. AB de Villiers took the field for some quick runs but could only put up 20 off 15 deliveries. The lower-order batting from South Africa was disappointing. Bangladesh bowlers Taskin Ahmed and Rubel Hossain tasted some late success and South Africa s innings came to an end with 369 for 6 on the board after 50 overs.

Bangladesh, on the other hand, never looked comfortable in front of the opponent pacers. Dane Paterson quickly removed Kayes and Liton Sarkar and that triggered a collapse. Five of the top six batsmen departed for single-digit scores and it was not until Shakib Al Hasan and Sabbir Rahman came out to bat that Bangladesh had a mentionable partnership forming. They brought in stability to the innings but failed to convert their partnership into a match-winning one.

Debutant Markram removed both Shakib (63) and Sabbir in the same over and Bangladesh started sinking again. Shakib was the only batsman to score a fifty in Bangladesh s innings. Their innings was finally brought to an end with 169 runs on the board and 9.2 overs still remaining, which in turn handed South Africa a humongous victory by a margin of 200 runs.

Paterson was the pick of the bowlers with his 3 for 44. Markram and Imran Tahir bagged a couple of wickets each. Markram shone with both bat and ball. The other debutant in the match, Willem Mulder, scored 2 and bagged the wicket of Mahmudullah.

Faf du Plessis was adjudged the Man of the Match for his 91-run unbeaten knock. However, the injury ended his tour. He has been replaced by JP Duminy as skipper in the T20s. 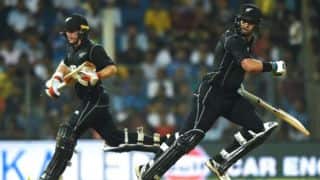