Zondi insisted that the short-term goal for his side was to start well against England following South Africa's poor performance.

Johannesburg: Expressing views on AB de Villiers‘ return to the role of wicketkeeper-batsman for the Test series against England, South Africa convener of selectors Linda Zondi has said that the batting prodigy taking the gloves will bring back the balance into the team. Zondi insisted that the short-term goal for his side was to start well against England following South Africa’s poor performance in the recently-concluded Test series against India, Sport24 reported. Describing De Villiers as a `team man`, Zondi revealed that the 31-year-old had committed himself for the upcoming two matches. With the return of De Villiers in the special role, South Africa have dropped Quinton de Kock from the squad. ALSO READ :AB de Villiers to keep wickets in Tests against England

Reflecting on De Kock’s omission, Zondi revealed that the batsman would still going to play a massive role in the team setup. He admitted that the decision was short term and they would reconsider their plan after the first two Tests. De Villiers had earlier displayed incredible resistance during his side’s 337-run defeat against India in the final Test by batting equivalent of almost 50 overs. South Africa, who lost a Test series against India 0-3, will aim to bounce back when they will take on England in the four-match Test series, starting from December 26 in Durban. ALSO READ: Brendon McCullum equals AB de Villiers’ record for most consecutive Tests since debut 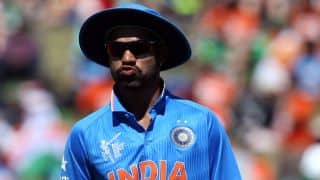