South Africa are through to their third final at the ICC Under-19 World Cup as they beat Australia by 80 runs at the Dubai International Cricket Stadium. It was a game where South Africa asserted their dominance at the start of each innings and ensured they had the Australians in a spot for a major part of the game. Two players stood out for South Africa — Clyde Fortuin and Kagiso Rabada.

If one watched Rabada bowl, one would have said that he is clearly one for the future. With a run-up that doesn’t bustle, he literally ambles in. But, once he gets to the delivery point, he can unleash those thunderbolts. For the under-19 level, a pace around 140 kmph is fantastic and he used it to good effect to surprise the batsmen. Matthew Short was done in by a short one that was too quick and he edged it to the wicketkeeper. Damien Mortimer was bowled through the gate with one that came in slightly. And then, Jaron Morgan edged one onto his stumps. In the first nine overs, Australia were tottering at 33 for three, chasing 231 to win.

Jake Doran and skipper Alex Gregory then tried to start a recovery. They were measured with Doran taking the chances when it came their way. In about 20 overs, they could add only 63 runs and the asking rate kept rising. South Africa’s bowlers had done well to keep them in check although one felt they were setting themselves up for a bigger challenge. However, Corbin Bosch got into the act and dismissed both of them in quick succession. Doran had almost been bogged down as he scored 36 off 74.

Rabada then came back into the attack to complete his five-for with some great bowling. Thomas Andrews pulled a short one and then Fortuin pulled off a stunner behind the stumps when Ben Ashkenazi edged one. James Bazley cut a lone figure through all that and could do nothing but fight alone. 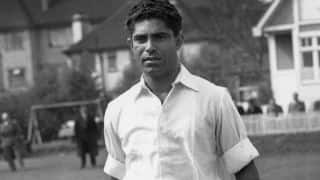