South Africa look to gain confidence on tour Down Under ahead of ICC World Cup 2015, says AB de Villiers

South Africa look to gain confidence on tour Down Under ahead of ICC World Cup 2015, says AB de Villiers

South Africa set to take on New Zealand and Australia ahead of the ICC World Cup 2015.

South Africa’s One-Day International skipper AB de Villiers feels that the tour to Australia and New Zealand will be a great test for the team ahead of the ICC World Cup 2015 next year. The Proteas team left for the tour Down Under on Monday.

“I think the important thing is to just get a bit of confidence over there against two teams I see as a threat at the World Cup — Australia and New Zealand. Mentally and physically, it would be a really good way for us to get on top of them before the World Cup starts,” De Villiers was quoted as saying by Sport24.

De Villers admitted that the Proteas still need to get their fielding right. “I think it’s gotten a little bit better over there (during the Zimbabwe triangular) and it’s not the basics. It’s turning games around, doing special stuff that I see other teams do. I don’t believe we are in the top two fielding teams in the world and you need that in a World Cup,” he added.

South Africa will play a short three-match ODI series against the Kiwis before they move to Australia with the series staring on November 4. 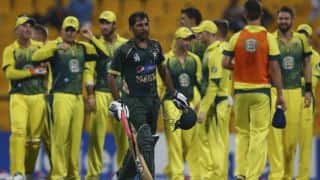 Daryll Cullinan gets out trying to play one-drop-one-hand