It is learnt lewd remarks about Warner s wife Candice spurred the heated argument between the two players.

David Warner came under scrutiny after the ugly run-in with Quinton de Kock. However, the crux of the matter was unknown by Cricket Australia (CA). It is learnt, as per Daily Telegraph, lewd remarks about Warner s wife Candice spurred the heated argument between the two players. This argument took place after Warner ran AB de Villiers out on Day Four of the first Test in Durban.

Brad Hogg was the first person to come out in support of Warner in the incident. However, he maintained that South Africa will probably continue sledging Warner about his wife throughout the series. He was also shocked at de Kock, presumably soft-spoken, at hurling such a sledge.

On remarks about Candice Warner: As far as I m concerned you don t say anything about someone s family: it s all about one-on-one, about that particular person or how they re playing in the middle. To be frank, South Africa have found a little sweet spot with David Warner. I think they ll be trying to nag him in the next three Test matches about his wife now or they ll try and say something concerning Candice in the next three Test matches, which is slightly getting under David Warner s skin. They ve opened up a can of worms here, Hogg told Fox Sports News Bill and Boz.

Over de Kock s comments: He s a very quiet character, nothing really phases de Kock and I m surprised that de Kock would say something about someone else s wife.

Timing of the video: If South Africa were trying to wind up the Australians by releasing that footage without knowing actually what happened in the middle that would be very disappointing on South Africa s front. Because the two players in question, they might have had a heated exchange out in the middle, heated exchange in the aisle as they were going into the change rooms and then they might have had a beer at the end of the game and it s all sorted itself out. 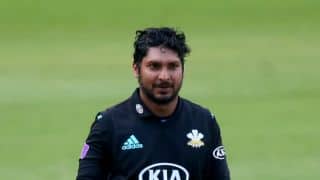