The South African captain said he was also expecting injured wicketkeeper-batsman Quinton de Kock to front up on Saturday for the start of the Test despite serious ligament damage to his right index finger.

Faf du Plessis criticised South Africa‘s performances against New Zealand as “not good enough” Friday, despite going into the final Test in Hamilton with an unbeatable 1-0 lead in the series. The South African captain said he was also expecting injured wicketkeeper-batsman Quinton de Kock to front up on Saturday for the start of the Test despite serious ligament damage to his right index finger. Team medical officials fear it could take him several weeks to recover, but du Plessis insisted he wanted his best side on the park — and their number two wicketkeeper, Heinrich Klaasen, has never played a Test.

New Zealand have strike bowlers Tim Southee and Trent Boult along with senior batsman Ross Taylor sidelined by injury, and du Plessis said while that made things “a little bit easier” it was no reason to rest de Kock. “We’ll be trying to put as much pressure on New Zealand, playing our strongest team. To push (de Kock) for one more game is something that’s important for the team,” he said. “If it’s a 50-50 (injury), and I think it is, then he will be able to play definitely because it’s a big game for us. To rest him for someone else, for me personally, is not an option.”

Central to du Plessis’s drive is another victory over New Zealand to lift South Africa’s Test ranking to number two in the world, which would complete a remarkable turnaround since being as low as seventh 12 months ago. “It’s been an incredible year for us and that’s why (this Test) is so important for me,” he said.

“Our goal was to try get back to number two at the end of the season, and if we do that in this Test match it will be an incredible year and we’ve ticked every box and we’ve won every series we’ve played.”

De Kock made 91 in a 160-run match-winning partnership with Temba Bavuma (89) in the second Test, but du Plessis said too few South African batsmen are scoring runs. “The standard we set for ourselves as a batting unit is extremely high and we haven’t delivered on that,” he said. “In every series we’ve played there’s been one or two guys that’s put their hand up and that’s been great. But, if we don’t have those guys who save us on the day there would have been a few times we would have been rolled out cheaply. “So that’s a concern and that’s something we have to work on. It’s not good enough.” 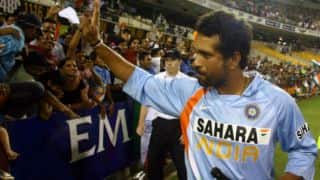