With powerful batting, South Africa posted a challenging 369 for 6 against Bangladesh in the third ODI.

With powerful batting, South Africa posted a challenging 369 for 6 against Bangladesh in the third ODI. At Buffalo Park, East London on Sunday, South Africa won the toss and opted to bat. Temba Bavuma and Quinton de Kock set the tone for a big total and were well succeeded by the likes of debutant Aiden Markram and Faf du Plessis. Though some Bangladesh bowlers tasted late success, the damage was done already.

Mashrafe Mortaza and Mehedi opened bowling for Bangladesh. However, South Africa were very little bothered about who the bowler was. De Kock and Bavuma were fired up to score quick runs and they stuck to the plan. Boundaries came in abundance as the duo brought up team s fifty in eight overs and hundred in 14.4 overs.

South Africa lost their first wicket in form of Bavuma, who was denied of his half-century for just 2 runs. Mehedi beat Bavuma with turn, and the batsman failed to connect the ball, giving a catch to Liton Das at long-on. South Africa were 119 for 1 at the moment.

While Bangladesh could cash on the chance, getting a few more wickets at the stage, turned out the following batsmen were too good to be dismissed cheaply. Though de Kock departed within the next four overs scoring 73, du Plessis and Markram made sure the flow of runs was maintained.

Markram and du Plessis put up a 151-run partnership before the latter pulled his muscle and was retired hurt for 91 9 runs away from what could have been his ninth ODI century.

Markram was run out off the last ball of the same over for 66. It was direct hit by Imrul Kayes from square leg to the middle stump that dismissed a diving Markram. Coincidentally, he was dismissed run out (97) on his Test debut as well.

AB de Villiers next played a quickfire 20 off 15 deliveries, an innings that included a six.

Apart from Farhaan Behardien, batting of lower-middle order was disappointing as most of them departed for single-digit scores.

Mehedi was the most successful of the Bangladesh bowlers, picking up two timely wickets while Rubel Hossain and Taskin Ahmed tasted late success in the match. 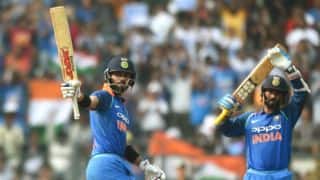