South Africa were leading by six runs at the end of the first session of the third day.

South Africa were off to a brisk start in their second innings after bowling England out for 323, reaching a score of 16 for no loss at lunch on Day Three of the third Test at Johannesburg. Stiaan van Zyl and Dean Elgar were batting on scores of 6 and 10 respectively, with the new-ball pair of James Anderson and Stuart Broad bowling their first spells of the day. The England pacers however, rattled the South African openers with a lethal spell of fast bowling, with Elgar and van Zyl suffering a few nasty blows. LIVE CRICKET SCORECARD: South Africa vs England 2015-16, 3rd Test at Johannesburg, Day 3

England began the day by resuming from their overnight score of 238 for five, with Joe Root batting on 106. The stylish right-handed batsman, who took on the all-seam South African attack in a masterclass innings on the second day, barely lasted a few deliveries on the third day as he was dismissed off an inside edge from a Kagiso Rabada delivery for which wicketkeeper Dane Vilas had to dive to his left to complete the catch. LIVE CRICKET UPDATES: South Africa vs England 2015-16, 3rd Test at Johannesburg, Day 3

Moeen Ali played a few impressive strokes and formed a decent 37-run seventh-wicket partnership with Bairstow, before falling for 19 off 28 balls in a manner similar to that of Root. It was an all-Bairstow show thereafter, as he hit a few boundaries to race to 45, bringing up the 300 as well as the first innings lead for England, before becoming Rabada’s fifth victim of the innings as the visitors wrapped up with a 10-run lead. 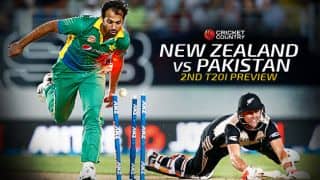