SA chased the 124-run target with ease after dismissing WI for 215 in the 2nd innings.

South Africa completed a demolition job of the West Indies on Day Five of the third Test at Cape Town. The hosts rode on Dean Elgar’s half century and a spirited bowling performance by Dale Steyn and Simon Harmer in tandem which made the win an inevitability despite overs lost due to rain on Day Four. Sulieman Benn was the stand out bowler for West Indies on the final Day but his efforts weren’t nearly enough as South Africa coasted home with consummate ease. By virtue of this win South Africa sealed the three match Test series two nil. AB de Villiers was awarded the man of the match for his scintillating 148 in the first innings. Where as Hashim Amla was awarded the man of the series in his first series as captain at home.

West Indies were uncharacteristically disciplined in their effort on the fifth morning of the third Test. In fact it was the best their bowlers had bowled over the course of the three Test match series. So much so that the first seven overs were maidens, a testament to their control. Dean Elgar and Faf du Plessis meanwhile were biding their time expecting the tourists to release the pressure sooner or later. Besides with just 115 runs to score in an entire day’s play there was hardly any scoreboard pressure. The onus was on Sulieman Benn to bowl the visitors to an unlikely win, the Proteas recognised that and were cautious in handling the left arm spinner.

The spinner finally got rewarded for his consistency when he delivered a snorter of a ball that took off disconcertingly from a length to take the shoulder of du Plessis’ bat. A simple catch was completed at backward point by Jermaine Blackwood who collided with a teammate but never looked like dropping it. But it was an archetypical case of too little too late as Hashim Amla joined Elgar in the middle to complete the formalities and take South Africa to what was a comfortable victory by eight wickets

West Indies had won an important toss. A third toss in succession. They didn’t bat too badly either, but it certainly could have been better. West Indies could have dominated the Test after the starts five of their batsmen got. All of them flattered to deceive, with none of the three half centurions even entering their sixties. Debutant Simon Harmer on Day One kept the game in balance with an impressive three wicket haul.

Dale Steyn returned on Day Two to skittle out a lower order that has shown a lack of fight and application through the course of the series. The age old problem of losing wickets in clusters haunted the hosts to the very end of the Test match. The Visitors were eventually dismissed for a middling 329. South Africa responded in much the same manner as West Indies themselves batted. The difference was a certain AB de Villiers who scored not only his 21st Test century but also an astonishing sixth against the West Indies. The hosts were helped by consistent partnerships right through their innings to eventually finish with 421 and a sizable lead of 92 runs.

The visitors were behind the eight ball from the outset as their second innings commenced disastrously with the loss of the two openers into the first one hour. Number three batsman Leon Johnson and Marlon Samuels rescued a stuttering innings and took West Indies to the close of play on Day Three four runs behind South Africa in the second innings. The unbeaten 61-run stand kept the tourists who needed to force a result to equalise the series in the game hitherto.

Majority of Day Four was lost due to rain which ensured that realistically  South Africa were the only team left with a chance to push for victory. The West Indies capitulation from 182 for three to 215 all out sealed the deal for the hosts. Samuels’ dismissal marked the beginning of the end. Samuels fell for 74 and fell victim to his enormous ego. He had loosely stated before the match that he’d never let a spinner dictate terms. Although Samuels won the initial battle, Harmer exacted revenge as Samuels’ ego got the better of him and he hit one straight down long-on’s throat who gobbled it up. Shivnarine Chanderpaul was left stranded as Steyn and Harmer ripped through the West Indies lower order to leave South Africa 124 to win and about three overs to negotiate. West Indies managed to strike in the last over of the day as Benn cleaned up a woefully out of form Alviro Petersen with an arm ball. But it was a rare moment of joy for the West Indians as despite their efforts on Day Five South Africa had no difficulty in overhauling their target of 124. 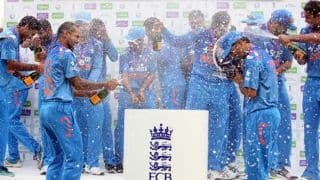 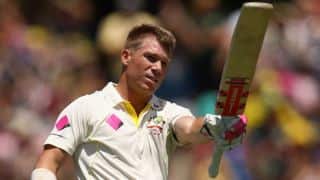