AB de Villiers scored a scintillating innings of 169 runs off 184 balls as South Africa were finally bowled out for 569 by Australia on day three of the third and final Test at Adelaide. 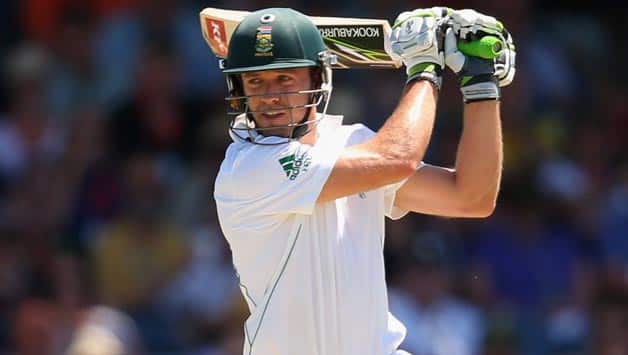 AB de Villiers scored a scintillating innings of 169 runs off 184 balls as South Africa were finally bowled out for 569 by Australia on day three of the third and final Test at Adelaide. Australia were 40 for 0 at stumps and 592 runs behind with six sessions to go.

de Villiers brushed aside his recent poor form by using every unorthodox shot possible in his innings that included a whopping 21 fours and three sixes at a strike-rate of 91.84. His first century since January this year came off three consecutive reverse-sweeps off Nathan Lyon as he silenced his critics in style. A chunk of his runs came in the deep mid-wicket and long-off areas of the pie where he smacked six fours and all three of his hits over the fence.

After getting the Proteas lead past the 600 mark, he made some room to go for a big heave over extra cover off Mitchell Starc, but managed to find the edge that went straight to keeper Matthew Wade.

Starc was the pick of the Australian bowlers who toiled for the majority of four sessions as the Proteas went bludgeoning away. The lanky 22-year-old from New South Wales picked up six for 154, while fellow left-armer Mitchell Johnson took the other four wickets.

Australian openers David Warner (29 not out) and Ed Cowan (nine not out) then survived 13 overs of pacy pressure from Dale Steyn, Vernon Philander and Morne Morkel, and a couple of flies buzzing around their helmets, as they took stumps at 40 for nought. The hosts face a herculean task in the two days of play ahead of them if they are to send Ricky Ponting off on a high note.

Earlier, Hashim Amla fell four runs short of a magnificent double century, while de Villiers finally found form with the bat after a string of failures as South Africa took Tea at 467 for five on the third day.

It did seem like the only way Australia were going to get wickets was through remarkable catches in the field as Mitchell Johnson stuck his right arm out and plucked Amla s mistimed straight drive to get his second caught-and-bowled and third catch overall in the innings. Alviro Petersen, Graeme Smith and Jacques Kallis had also fallen to great catches by the hosts.

Dean Elgar then ended a pair-shaped Test debut after struggling against Johnson s bounce and pace, but not before getting stung on the right arm a couple of times by the latter s short ones hurled at over 140kph. He became the 10th South African and 38th player to be dismissed on a pair on Test debut.

Schoolmates de Villiers and Faf du Plessis then endured a gripping 20 minutes before the tea break and took the Proteas lead past 500. de Villiers got his first fifty-plus scores in nine Test innings and then topped it up with his first ton since January this year with three successive reverse-sweeps off Nathan Lyon.

Amla started the third day on 99 not out and ended the first session on 149 not out as South Africa took an imposing lead of 382 at lunch. Amla got his 18th Test century on the third ball of the day as he flicked Mitchell Johnson off his hips for a single to long leg. Amazingly, his 84-ball 100 included just 10 fours.

Meanwhile, the Australians toiled and took the solitary wicket of Jacques Kallis (37) in the morning. The big all-rounder was looking good after struggling with a pulled hamstring throughout the second Test and was 59 runs short of the 13,000 Test runs when he tried to pull Mitchell Starc’s (two for 103) bouncer. He was to get a healthy top edge that carried to the other Mitchell – Johnson – at fine leg.

The Australians bowled a little better than they did in the final session of day two when Amla and Graeme Smith (84) put up a 178-run stand and scored 268 runs in the session at a rate higher than six runs an over. The hosts got the run rate down to below five per over but that didn’t deny South Africa the chance to take total control of the deciding Test.

Inception: MS Dhoni & Company plant the idea of retirement in the legend’s head - Part 2 of 3

Inception: MS Dhoni & Company plant the idea of retirement in the legend’s head - Part 3 of 3