Mitchell Johnson again has caused all sorts of problems for the South African batsmen.

South Africa have limped their way to 132 for the loss of five wickets in their chase of 482, at the end of the post-lunch session on Day Four of the first Test at the SuperSport Park, Centurion.

After Michael Clarke declared the Australian second innings this morning at 290 for the loss of four wickets and set the hosts a target of 482 to win the first Test, South Africa have already their top-order in the humongous chase. They started off terribly against Mitchell Johnson as the speedstar took the wickets of openers, Alviro Petersen and Graeme Smith off consecutive overs.

Hashim Amla and Faf du Plessis then showed signs of recovery, before a venomous inswinger from Peter Siddle trapped du Plessis in front. While du Plessis would have considered himself unlucky as the ball kept really low, the Australians would have taken them as and however they came.

That wicket though brought AB de Villiers to the crease — the only South African batsman to have looked comfortable from ball one. He and Amla looked like they could save the sinking ship during their post-lunch partnership, but then Amla lost his wicket to a delivery from Ryan Harris that bounced a little more than he expected, and his cover drive off the back foot resulted in an edge to Shaun Marsh at first slip, who gladly accepted the sitter.

De Villiers continued his lone battle as JP Duminy struggled throughout his stay in the middle until he was dismissed by Johnson again. Johnson completed his 10-wicket haul for the match with that wicket.

Ryan Mclaren then joined de Villiers in the crease, and he got a nasty welcome from Johnson. A short ball crashed into his front ear, and the batsman started bleeding. But he soon got patched up. 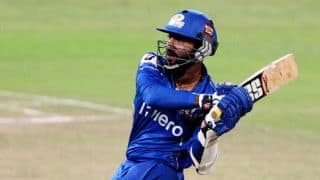