A five-wicket haul from Mark Gillespie was not enough to prevent South Africa from taking first innings lead on day two of the second Test after dogged resistance from the Proteas' tail. 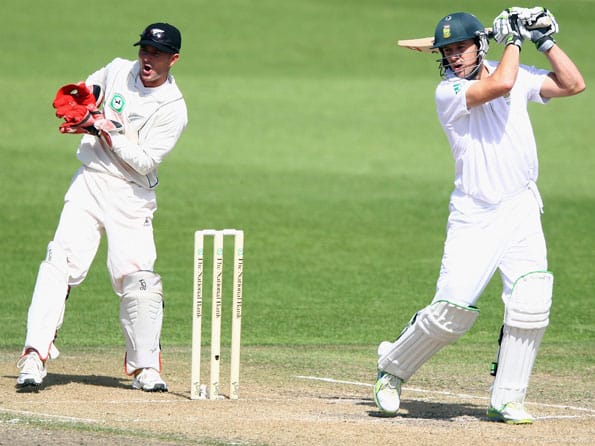 A five-wicket haul from Mark Gillespie was not enough to prevent South Africa from taking first innings lead on day two of the second Test after dogged resistance from the Proteas’ tail.

South Africa were bowled out for 253 at tea, securing a 68-run lead, after starting the day at 27 for two and enduring a torrid spell from Gillespie, who finished the innings with five for 59.

AB de Villiers top scored with a gritty 83, working well with the lower order after South Africa slumped to 88 for six in the first hour as Gillespie made a triumphant return to Test cricket after three years in the wilderness.

Morne Morkel produced a valuable unbeaten cameo of 35 from 44 balls, helping South Africa edge ahead after bowling out New Zealand for 185 on the opening day following a dramatic batting collapse by the Black Caps.

South Africa added 35 to their overnight total before Gillespie dismissed Hashim Amla for 16, the batsman attempting to guide the ball through backward point but sending a low catch to Kane Williamson.

The 32-year-old, called into a revamped attack after New Zealand disappointed with the ball in the drawn first Test, struck again in his next over to claim the prized scalp of Jacques Kallis.

Kallis, who scored a century in the first Test, never looked comfortable against Gillespie and was lucky to top-edge a short-pitched ball safely over the boundary for six.

He dabbed tentatively down the leg side two balls later, doing just enough for the face of the bat to kiss the ball and travel to Kruger van Wyk behind the stumps.

Gillespie made it three when he trapped Alviro Petersen (29) lbw with a ball that hit the batsman low in the pads, a television review umpire upholding the original decision the delivery was plumb and headed for middle stump.

The collapse continued with Gillespie’s fourth wicket in four overs when Jacques Rudolph, another century-maker in the first Test, clipped an edge to van Wyk, out for one after facing only four balls.

New Zealand maintained the pressure with some tight bowling after lunch break and were rewarded when Gillespie took his fifth wicket with a full, straight ball that slipped through Mark Boucher’s guard and into the stumps.

De Villiers was unlucky to depart on 83, blocking a fizzing Vettori delivery which bounced back from the pitch and into his stumps, with a free-hitting Morkel keeping the score ticking before New Zealand wrapped up the innings.(AFP)