Steyn and Morkel grabbed eight second-innings wickets between them on a turning track.

South Africa, led by Dean Elgar, JP Duminy and Dale Steyn, registered their maiden Test match victory at Galle when they trounced the hosts by a huge margin. This soon after they created history by winning their first ever bilateral One-Day International (ODI) series against Sri Lanka at home earlier in July.

After Elgar and Duminy’s terrific tons in the first innings, it was Steyn who stole the show, grabbing five for 54 to bowl out Sri Lanka for just 292. A brave declaration from Hashim Amla followed, as he left Sri Lanka a target of 370 in a day and a half to win. The decision seemed like it would backfire after Kusal Silva and Kumar Sangakkara put on a 104-run stand to put Sri Lanka in control early on Day Five. However, it was Steyn who again opened the door for South Africa with the wicket of Silva.

Sri Lanka started the fifth day in a strong position, with and Sangakkara and Silva looking good, but the wicket of Silva opened the floodgates as South Africa were able to snare five wickets in the first session of Day Five. South Africa started the day with Steyn and Morne Morkel, and Steyn broke through soon, getting Silva to nick one behind. Sangakkara was soon dropped by Quinton de Kock — who had just taken a brilliant catch to get rid of Silva — off Morkel. However, the wicketkeeper made up for it by grabbing on to Mahela Jayawardene’s outside edge soon after the drinks break, as Sri Lanka slipped further.

However, the real game-changing moment came when Sangakkara pulled arguably the worst delivery of the match, bowled by JP Duminy, straight into the hands of Hashim Amla at short midwicket. After batting beautifully, Sangakkara departed for 76 to a shot he would dearly like to forget. The landslide continued for Sri Lanka when Lahiru Thirimanne edged one from Steyn to AB de Villiers in slip, and Dinesh Chandimal went for a hook off Morkel only to feather an edge to the ‘keeper.

Angelo Mathews fought a lone battle, and despite some brief support from Dilruwan Perera and Rangana Herath, Sri Lanka were not able to recover from their horror first session. With Shaminda Eranga injured, the hosts were playing with virtually only 10 batsmen. However, after Lakmal’s dismissal, Eranga did come out to bat. He couldn’t survive more than one ball though, as South Africa won by a colossal 153 runs.

Man of the match: Dale Steyn 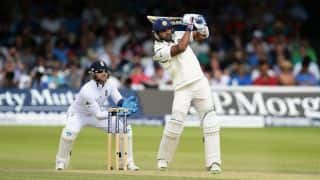