Hashim Amla has suggested that South Africa will no way underestimate Afghanistan ahead of their Group 1 clash on Sunday.

Considering the fact that Afghanistan showed a great fight against Sri Lanka, South African opening batsman Hashim Amla has suggested that South Africa will no way underestimate these opponents ahead of their Group 1 clash on Sunday. “We can’t take Afghanistan for granted. They played well against Sri Lanka. They will aim to play well against us. They are a good and exciting team. We have to keep up with our good performance to beat them,” he added.

South Africa failed to defend a huge total of 229 in their previous match against England which clearly exposed their struggle in the bowling department. “Our batting line-up has been the best. But I think 229 was a good score for us. As we all know that Wankhede is a high-scoring venue, England played very well to chase down the target. We lacked in bit of basics against England. We gave away too many extras [26, including 20 wides]. Hopefully we can rectify the mistakes and put up a good performance on Sunday,” the right-hander said. 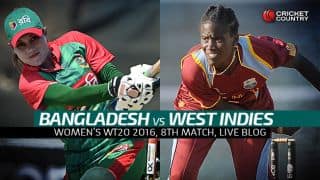