As expected it was Imran Tahir who dominated the Australian batsmen as the visitors’ struggle against spin is no more hidden.

Australia and South Africa lock horn in the second Twenty20 International (T20I) at Johannesburg on Sunday. After losing the opening encounter of the three-match T20I series, Australia will eye to come back in the second game. As expected it was Imran Tahir who dominated the Australian batsmen as the visitors’ struggle against spin continued. Former T20I skipper Aaron Finch was successful in giving Australia a flying start in the first innings before Tahir put the visitors on the back foot by dismissing Finch. He added two more scalps later on. FULL CRICKET SCORECARD: South Africa vs Australia, 2nd T20I at Johannesburg

After South Africa sent opener Usman Khawaja back to the pavilion, the duo of David Warner — batting at No. 3 in this match — and Finch took charge of smashing the Proteas’ attack all over the park at Durban. For as long as those two were at the crease a 200-plus total was on the cards. However, they were dismissed in quick succession and that was followed by a terrible innings from Steven Smith, whose 17-ball 6 put Australia under pressure.

Australia’s bowlers got their side off to a terrific start as AB de Villiers was dismissed off the very first delivery of South Africa’s innings, off Nathan Coulter-Nile’s bowling. Unfortunate for Australia, they failed to convert that good start into a win. South Africa’s T20I skipper Faf du Plessis led from the front and scored an excellent 40 runs off 26 balls that included four boundaries and a six. His innings pushed the result in the favour of the hosts. When Peter Nevill’s brilliance on field got him run out, the momentum slid back to Australia. All Australia had to do was carry it through the end, which they could not do. David Miller, whose big hitting abilities in the T20 format under pressure are well known, single-handed snatched the match from Australia to take South Africa home successfully. READ: Australia need to adapt to counter spin vs South Africa: Aaron Finch

However, Australia can dig out a few positives from the loss too, with Mitchell Marsh’s form being one of those. The younger Marsh brother has delivered with the bat numerous times for Australia when the top-order has failed. His century against India in the fifth One-Day International (ODI) at Sydney was one of the recent instances when he had stepped up. If Coulter-Nile, who picked three wickets at Durban, continues to make regular breakthroughs, he will be a great option for Australia in the absence of their pace spearhead Mitchell Strac.

The upcoming ICC World T20 2016 is the ultimate goal for these two sides and clearly Australia is a weaker team when the recent results in this format are considered. They desperately want each player to contribute like they do in ODIs to ensure they win the next two T20Is against South Africa and win the series. Australia will automatically be on back foot if they enter the World T20 with a loss in South Africa. 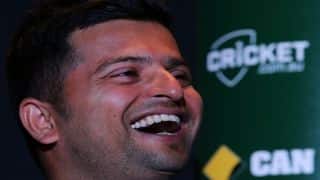