South Africa take on Australia in the first of the three-match Twenty20 International (T20I) series at the Kingsmead Stadium in Durban.

Hosts South Africa take on visitors Australia in the first of the three-match Twenty20 International (T20I) series at the Kingsmead Stadium in Durban on Friday, as the live cricket streaming of the match is available online on tensports.com, while the live telecast of the match would be available on Ten Cricket and Ten HD. South Africa, who recently win their T20I series against England by 2-0, had a hard-fought series, and would aim to continue the winning momentum. While Australia, who lost their last T20I series againt Indian 0-3 at home, would aim to return to winning ways against the African lions, as they eye the ICC World T20 title in India this month. FULL CRICKET SCORECARD: South Africa vs Australia 2016, 1st T20I at Durban

Australia who was the top-ranked T20I side prior to the three-match series against India witnessed a serious downfall in the rankings after the 0-3 loss. Just after the end of the third T20I at Sydney, the International Cricket Council (ICC) sent out the tweet regarding the Australians falling to No. 8 and India was the new No. 1 T20I side. Nevertheless, before entering the field at Durban, Australia hold the 7th spot, while the South Africans are on the second position on the table of the ICC T20I team rankings. FULL CRICKET UPDATES: South Africa vs Australia 2016, 1st T20I at Durban

Meanwhile, South Africa’s line-up is no less experienced, especially in the T2o format. Du Plessis, Quinton de Kock and Hashim Amla make up the top-order of South Africa. The likes of AB de Villiers, David Miller and JP Duminy fall next in the line-up. The batting line-up seems as strong as their bowling department that is once again boosted with the return of Dale Steyn. With Steyn in the squad, Kyle Abbott is surely not assured of being their leading pacer, despite being the joint highest wicket-taker for the Proteas along with Steyn in the last four T20I series. 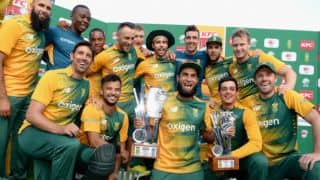