Nathan Lyon is overall the 33rd bowler to 300 scalps, sixth Australian, second spinner and the first offie from his country to the feat.

Day Two of the ongoing third Test between South Africa and Australia was memorable for Morne Morkel. On verge of international retirement, he attained 300 scalps and became only the fifth South African to the feat. Day Four turned out to be the same for Australia off spinner, Nathan Lyon. Lyon reached the 300-wicket club (33rd overall) by dismissing Kagiso Rabada. He, thus, becomes the sixth Australian after Shane Warne, Glenn McGrath, Dennis Lillee, Mitchell Johnson and Brett Lee to the landmark. In addition, he is only the second spinner, and first offie from the nation to achieve 300 scalps or more.

In day where nothing went right for the Australians, Lyon invited Rabada to step out, beating him with flight to have him stumped. Lyon reached the feat in his 77th Test and he averages a little less than 32.

This, possibly is Australia’s best achievement in this Test, that is marred by the ball-tampering scandal. On Day Three of the Cape Town Test, Cameron Bancroft was caught on live camera tampering the ball. Later, Steven Smith accepted that the “leadership group knew about it”. This led to an uproar in the cricket fraternity. Smith and his vice-captain David Warner stepped down from their positions and Australians, for the rest of the third Test is led by wicketkeeper Tim Paine.

Meanwhile, South Africa had stretched their lead to 415 on Day Four. 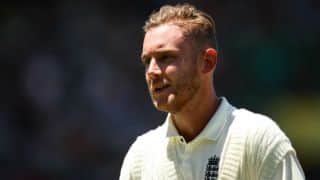