Tabraiz Shamsi, Kyle Abbott did a commendable job with the ball and broke the spine of Australian batting by accounting for seven wickets between them.

The fourth One-Day International between South Africa and Australia at Port Elizabeth saw the visitors being bowled out for a mere score of 167 as the hosts bowlers did a commendable job in restricting the star-studded batting line up. Tabraiz Shamsi, Kyle Abbott did a commendable job with the ball and broke the spine of Australian batting by accounting for seven wickets between them. Matthew Wade and Mitchell Marsh contributed some valuable runs and showed some resistance to help their side cross the 300-runs mark. It’s going to be a tough ask for the Australian bowlers as they lack experience and do not have enough runs on the board. LIVE CRICKET SCORECARD: South Africa vs Australia, 4th ODI at Port Elizabeth

Australia decided to bat first after winning the toss on a surface, which had a lot of assistance for the bowlers. Australian openers failed to deliver as they lost both of them early on in their innings. Abbott ran through their top-order as he removed Aaron Finch and David Warner with the new ball. He bowled two beautiful deliveries to shatter both of the batsmen’s stumps. Abbott shattered Finch’s off stump while got the ball in to Warner,which was an absolute ripper. It was some splendid exhibition of swing bowling and Abbott has certainly left a mark. Australia were in deep trouble after losing both the openers inside three overs and the onus of getting the team out of troubled waters was on the skipper Steve Smith and George Bailey but even they failed to do so.

George Bailey was removed by Dwayne Pretorious while Tabraiz Shamsi got the better of Smith. These dismissals broke the backbone of the Australian batting order as both have the ability to play big innings under pressure. Bailey was trapped leg before as the delivery nipped back in and also lacked enough bounce. Smith looked good and was playing his shots when a top-spinner from Shamsi struck his pads but the on-field umpire turned it down. The decision was reviewed by the South African after which Smith was ruled out as it looked plumb in DRS. Skipper was gone and South Africa were in command. Travis Head was in good touch but Shamsi showed no mercy whatsoever as he got rid him for a duck and had two wickets to his name in the same over.

Mitchell Marsh stood like a rock at the other end as Australia were running out of options. Matthew Wade walked in and the duo stitched a good partnership to bail Australia out initially. Marsh played some some mettle and went on to score a much needed fifty. He waited for the loose deliveries and bid his time at the crease. Just when things were looking good for Australia, Abbott got rid of a well set Marsh for 50. Moments later, Hastings was also dismissed by Shamsi. Adam Zampa was not able to handle a pumped Abbott as the latter shattered his off stump with sheer pace. Wade went on to score a tenacious fifty but was later dismissed by Aaron Phangiso for 52. Chris Tremain garnered some priceless runs as Phangiso got rid of Scott Boland to bowl out Australia for 167.

South African bowlers have a been up to the mark and did a good job in restricting Australia for 167. The target can turn out to be tricky as the surface has enough assistance for the bowlers. South African batsmen can’t afford to take things lightly as Australia have the potential to bounce back. 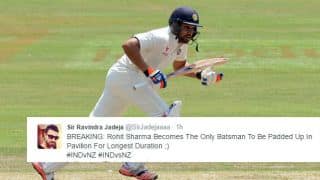 Rohit Sharma gets trolled on Twitter for random reasons 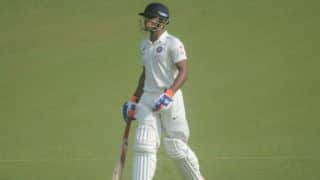 Ranji Trophy 2016-17, Day 3 match results: Delhi ease to victory against Assam by an innings and 83 runs