South Africa vs Australia, Tests: Dean Elgar blames himself for his dismissals

South Africa vs Australia, Tests: Dean Elgar blames himself for his dismissals

Dean Elgar has notched up 7, 9, 57 and 5 in the two Tests of the four-match series against Australia; currently tied at 1-1.

South African opener Dean Elgar has admitted that he is letting himself down with what he describes as “silly and uncharacteristic dismissals” so far in 2018 season. The 30-year-old was one of the star players for South Africa last year, ending 2017, with a total of 1,128 runs, including five centuries and four-half centuries, at an average of 53.71. However, Elgar failed to replicate his last year’s good performance as he notched up 7, 9, 57 and 5 in the two Tests of the four-match series, which is currently levelled at 1-1.

And Elgar admitted that he is quite frustrated by his stupid dismissals in this year so far. “It’s been a little bit frustrating. I actually feel that I’m batting nicely. I’m getting through all the tough parts and I’m letting myself down with silly, stupid and uncharacteristic kind of dismissals,” ESPNcricinfo quoted Elgar, as saying.

Elgar said, though it is difficult to follow up on a good year, he needs to work on his mistakes and try to get past it. “It’s something I’ve thought about and reflected on and I know it’s not what our team requires. Our team requires me to try and bat out a day and that puts us in a great position. It’s always going to be difficult to follow up on a very good year last year, but I am aware of it,” Elgar said.

Meanwhile, Elgar’s opening partner Aiden Markram has amassed 207 runs at an average of 51.75 in the ongoing Test series against Australia. The two sides will play third and penultimate Test between at Newlands from Thursday. 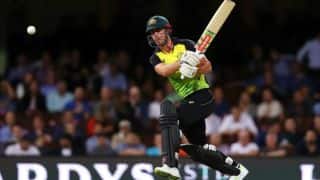