As per the latest tweets of South African fast bowler Dale Steyn, he might make a come back in the 3rd Test against England at Johannesburg. Steyn was ruled out of the 2nd Test following the shoulder injury during the 1st Test at Durban. Steyn was facing discomfort while bowling in the first match and left the field mid-way due to pain in his shoulders. He returned back to the field and played rest of the overs. He was taken for scan immediately after the 21st over where he could not manage the excruciating pain. LIVE CRICKET SCORECARD: South Africa vs England, 2nd Test at Cape Town

Steyn also missed out final three Test against India and Kasigo Rabada was taken as replacement. Rabada was taken as replacement for 2nd Test as well at Cape Town. He has started off playing the warm up matches in order to decide his fitness before the 3rd Test match. With the on going 2nd Test, South Africa are in good position as of now with Hashim Amla 157 not out and South Africa trailing by 276 runs more. They completed the 3rd day of first innings at 353/3. Faf du Plessis is playing on 51 off 115 to support his skipper on the other end. ALSO READ: Dale Steyn ruled out of South Africa vs England 2nd Test; Kagiso Rabada to replace him

Steven Finn and Ben Stokes have managed to pick one wicket each as of now and the Stiaan van Zyl was run out by Nick Compton/ Jonathan Bairstow. Today is the 4th day of the 2nd Test and will be interesting to see how the match turns and if South Africa manages to equal the  game. If Steyn comes in from 3rd Test it will boost South Africa immensely.

Steyn took 4 for 70 in the first innings of the first Test against England at Durban. His performance went down in the second innings due to the shoulder injury. He looks forward for the coming matches and aims to get fit by then. 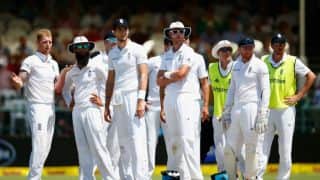 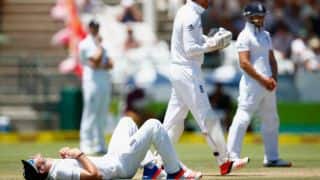