Linda Zondi said that South Africa would decide whether to continue with Stiaan van Zyl or replace him only after the third Test.

Johannesburg: South Africa convener of selectors Linda Zondi has backed his side’s struggling opener Stiaan van Zyl ahead of the third Test of the four-match series against England. Van Zyl had been struggling with his form since the start of the Test series against India. He had scored just 93 runs in his last eight matches at an average of 11.63. Extending his support to the 28-year-old, Zondi said it was extremely important to back capable players, adding that they would look after his performance in the upcoming Test. He said that they would decide whether to continue with him or replace him only after the third match.  FULL CRICKET SCORECARD: South Africa vs England 2015-16, 3rd Test at Johannesburg

South Africa are currently trailing 1-0 in the four-match series against England after the second match between the two sides ended in a draw. The two sides will play their last two matches in Johannesburg (from January 14) and Centurion (from January 22). READ: Stiaan van Zyl’s century on debut earns him a dream start to Test cricket

Earlier, England all-rounder Chris Woakes had said that temporary South African skipper AB de Villiers has more impact on the team than Hashim Amla, ahead of his first match as a Test captain against England. Amla, whose leadership received sharp criticism since the start of the England series, had stepped down as Proteas Test skipper shortly after the conclusion of the drawn second Test against England at Newlands. Talking about the opening match in Kingsmead, Woakes said that Amla doesn’t seem to be leading his side as much as a normal captain would do, Sport24 reported. 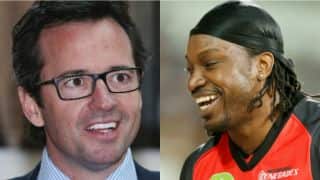