Anderson, who made his Test debut at the age of 20, is the leading wicket-taker for England in Test cricket.

England’s premier fast bowler pacer James Anderson on Thursday became the first fast bowler in the history of Test cricket to make 150 appearances. Anderson achieved the rare feat while making a return from injury during the first Test against South Africa beginning at the SuperSport Park, Centurion.

The 37-year-old – who received his milestone cap from former England captain Nasser Hussain – is the ninth player overall to play 150 Test matches a pacer. With this feat, the English pacer has joined the likes of Sachin Tendulkar, Steve Waugh and Jacques Kallis.

Coming back after a long injury layoff, Anderson made a terrific comeback in whited as he scalped Proteas Dean Elgar on the very first ball he bowled of the first Test.

After dismissing Elgar for a ‘golden duck’, Anderson became the fifth bowler in this decade to claim a wicket off the first ball of a Test match. He joined an exclusive club of bowlers to achieve this feat.

Wicket of the first ball of the Test in this decade:

After Anderson, his compatriot Stuart Broad is second on the list with 135 Test appearances. Former West Indies pacer Courtney Walsh comes next with 132 Tests appearances. The right-handed bowler last represented England in the first Ashes Test when he had to leave the field after bowling just four overs. After that, he also missed the two-Test series against New Zealand.

Anderson, who made his Test debut at the age of 20, is the leading wicket-taker for England in Test cricket.

Former captain Alastair Cook holds the distinction of being the most capped Test player for England. Cook played 161 Tests in which he scored 12,472 runs, including 33 centuries. 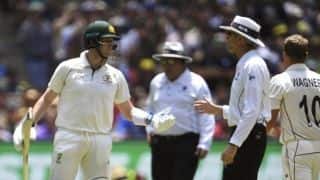 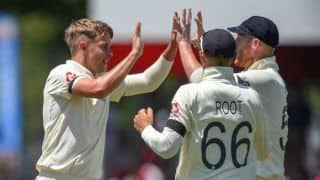