New Zealand still have a herculean task of saving the test, as a win looks likely, but their approach will be up for grabs for everyone with another grueling Test series coming against India, at their den.

It is Day Four of the second and final Test between South Africa and New Zealand. The match is being played at the Super sport park, Centurion. Catch the live cricket streaming of the match on tensports.com, while the live telecast of the match is available on Ten 2. Also enjoy the live streaming of the match on your mobile through Ditto TV app. Day Three went in favour of the hosts their bowlers restricted New Zealand for a paltry total of 214 with just Kane Williamson standing tall with a 77 along with starts from Henry Nicholls (36) and Neil Wagner’s 30. South African pacers got good pace, bounce and seam as they chipped in with wickets at regular intervals. Dale Steyn and Kagiso Rabada got three wickets apiece whereas Vernon Philander got two scalps. FULL CRICKET SCORECARD: South Africa vs New Zealand, 2nd Test at Centurion

In the last session, New Zealand bowlers took some momentum back from the hosts as Faf du Plessis did not enforce a follow-on after having a healthy lead and they came out to bat again. South Africa are tottering at 105 for 6 at stumps on Day Three, but still lead by 372 runs. Tim Southee and Trent Boult got two wickets each whereas Wagner and Doug Bracewell shared two wickets among themselves to rattle the hosts, a bit, in their second innings. New Zealand’s no showing with the bat in the first innings will cost them dearly as even a spirited effort from their bowlers may go unnoticed having already conceded a lead of near 400 to the hosts. READ: SA vs NZ: Seamers shine on Day 3 at Centurion

In the first innings, du Plessis scored a hundred along with half-centuries from Hashim Amla, Quinton de Kock, Stephen Cook and JP Duminy. Among the New Zealand bowlers, Wagner remained the most successful with a 5-for while Southee, Doug Bracewell and Mitchell Santner all bagged a wicket each.

Chasing the huge target, New Zealand could not get a good start, losing three of their top-order batsmen on Day 2 itself. None of Martin Guptill, Tom Latham or Ross Taylor could put up a double digit score.

Talking about his hundred from first innings to AFP, du Plessis said, “There is a lot happening in the wicket and we just needed one guy to anchor the innings and keep them out there as long as possible. The plan right from the beginning was to try to get to 400, which is a good score on this wicket, and then have a little dip at them at the end of the day.

“The grass stands up a little more towards the end of the day and because of the light you can see the little indentations on the pitch which you don’t see when the sun is shining brightly in the middle of the day. It plays on your mind a bit.”

The first Test had ended in a draw. New Zealand had started things off well, restricting the hosts at 263. Amla was the only batsman to score a half-century while Temba Bavuma contributed with a 46. Both Boult and Wagner had bagged 3 wickets to cause the total damage to the South Africa innings.

South Africa made a comeback with their bowling as ace speedster Steyn promptly removed Guptill and Latham in quick succession at the very start of New Zealand’s batting innings. As Williamson and Taylor were batting, rain disrupted play. Though rain stopped post second day, the poor condition of the Kingsmead outfield, its wetness compelled the match umpires to call off the match.

The hosts look set for winning the series which is currently tied at 0-0. It will be interesting to see when and on what score do they declare. New Zealand still have a herculean task of saving the test, as a win looks likely, but their approach will be up for grabs for everyone with another grueling Test series coming against India, at their den. Their bowlers have reduced some momentum from the hosts but it is up to their batsmen to stand up and deliver. 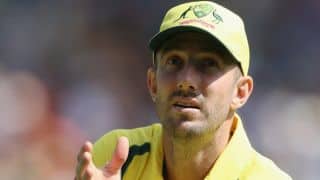