South Africa, under new skipper Farhaan Behardien will look to ensure that Proteas continue their dominance over Sri Lanka on this tour.

After a disappointing Test series, Sri Lanka lock horns with South Africa in the first T20 International (T20I) at SuperSport Park, Centurion. A new-look South Africa under new skipper Farhaan Behardien will look to ensure that Proteas continue their dominance over Sri Lanka on this tour. It will not be easy as there will be quite a few new faces in the line-up. These include Lungi Ngidi, Dane Paterson, JJ Smits, Theunis de Bruyn and Mangaliso Mosehle. With 46 T20Is under his belt, David Miller is the most experienced player in the South African camp. Along with Miller, South Africa have a few experienced campaigners like Imran Tahir and Wayne Parnell in the squad as well.

Heino Kuhn makes it back to the South African side after a gap of over 5 years. As far as the Sri Lankan side is concerned, they have all of their regulars fit and would surely look to put up a better show than they did in the Test series. 23-year-old all-rounder Thikshila de Silve gets his maiden call-up. Sri Lanka as a result do not have place for all-rounder Thisara Perera, who is currently playing in the Big Bash League (BBL). However, Angelo Mathews has many quality players in his disposal.

He has the experience of Dinesh Chandimal, Nuwan Kulasekara, Suranga Lakmal and Seekkuge Prasanna. He also has a few young guns in the form of Dhananjaya de Silva, Kusal Mendis and Lakshan Sandakan to name a few. Sri Lanka go in with a fine mix of youth and experience and perhaps for the very first time on this tour, they look to be a threat. But they will have to live up to their full potential on the field and implement all their plans successfully. The South African side might be inexperienced, but can spring up a surprise or two.

Last time Sri Lanka played T20I cricket, they were decimated by Australia in the two-match series. South Africa too lost their previous T20I series, again against Australia, but that matters very little as South Africa do not have many big guns from that series.

A win for South Africa in this match will assure the management that their bench strength is very strong. They could very well make a case for themselves to be included even when the full strength side is picked. For Sri Lanka on the other hand, a loss in this match will further damp their confidence. They desperately need a win under their belt to boost their confidence after taking a beating in the Tests. India vs England, 2nd ODI: Yuvraj Singh rates his innings as one of the best 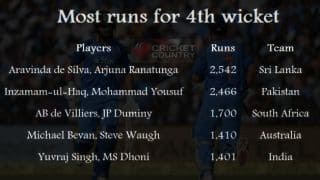