Leading the series 1-0, Sri Lanka made an inspired start on Day 1 of the second Test.

Sri Lanka made an inspired start as they claimed three wickets in the space of seven balls on the first morning of the second Test against South Africa on Thursday.

The hosts lost their first three wickets with the total on 15 after Du Plessis won the toss and decided to bat.

Vishwa Fernando, who took eight wickets in Sri Lanka’s surprise one-wicket win in the first Test in Durban, started South Africa’s slide when he took two wickets in two balls in his third over.

The left-armer bowled Dean Elgar for six. After setting up Elgar with a series of balls which swung away from the left-hander, Fernando bowled a delivery which straightened and knocked back the off stump.

Fernando then bowled Hashim Amla first ball with a full delivery which swung into the right-hander.

Temba Bavuma survived the hat-trick, but was out without scoring in the next over when he was needlessly run out, backing up too far when Markram played Suranga Lakmal to mid-on where Kasun Rajitha picked up and broke the wicket at the bowler’s end with a direct hit.

With South Africa needing to win to square the two-match series, Aiden Markram and Du Plessis batted cautiously, putting on 58 for the fourth wicket before part-time bowler Karunaratne brought himself on to bowl an over of medium-pace. He produced a perfect yorker with his fifth ball to bowl Du Plessis for 25. It was Karunaratne’s second wicket in 60 Tests.

Markram was unbeaten on 37.

In the only change from the teams that played in Durban, South Africa picked debutant Wiaan Mulder as a batting all-rounder in place of injured opening bowler Vernon Philander. 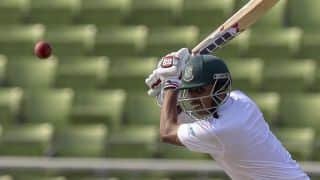