South Africa have picked Aiden Markram and JP Duminy in the playing XI.

South Africa have won the toss and elected to bowl in the fourth ODI against Sri Lanka at the St George s Park in Port Elizabeth on Wednesday. (SA vs SL, 4th ODI: LIVE UPDATES)

South Africa have picked Aiden Markram and JP Duminy in the playing XI. The two were recalled to the squad for the fourth and fifth ODI of the series. (ALSO READ: We can t have a mediocre batting line-up at World Cup, need to raise standards: Faf du Plessis)

Dale Steyn is also picked in the playing XI while Imran Tahir has not made the cut to the team, with Tabraiz Shamsi playing as a lone specialist spinner.

Markram is making a comeback to the side following his impressive showing in the domestic 50-over tournament. 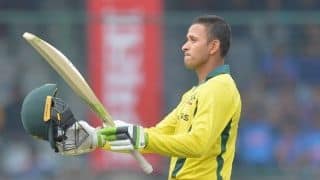