Kusal Mendis half-century and Isuru Udana and Priyamal Perera’s 61-run stand guided Sri Lanka to 225 in the fifth and final ODI against South Africa at the Newlands in Cape Town on Saturday.

Imran Tahir, who was playing his final ODI at home, scalped two wickets while Kagiso Rabada took three, including 2 in 2 consecutive deliveries in the 49th over. (South Africa vs Sri Lanka, 5th ODI: LIVE UPDATES)

Electing to bat, Sri Lanka lost their openers – Avishka Fernando and Upul Tharana with only 14 runs on the board. Oshada Fernando and Kusal Mendis tried to steady the Sri Lankan innings as the two put up a 49-run stand before Tahir dismissed the former for 22.

Angelo Perera then joined Mendis in the middle and the duo denied South Africa any immediate success. However, just when it looked that the two were set for a big partnership, Tahir once again gave South Africa a breakthrough, dismissing Perera. While Mendis went on to score a fifty, Sri Lanka, from 125/3, were reduced to 161/7 and also lost Mendis to a run-out. (ALSO READ: JP Duminy latest to announce ODI swansong)

Isuru Udana, who was Sri Lanka s top-scorer in the fourth ODI with a breezy 57-ball 78-run knock, once again came to his team s rescue as he and Priyamal Perera pushed Sri Lanka past 220, forming a 61-run partnership before Rabada s two-wicket over saw both depart on the consecutive deliveries. (ALSO READ: IPL 2019: With World Cup approaching, South Africa yet to decide on release of players)

Sri Lanka, who are fighting to avoid a 5-0 cleansweep, eventually put 225 runs on the board after electing to bat. 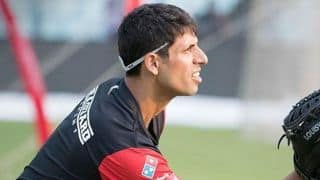