South Africa captain Faf du Plessis was a happy man as his team found a way out of trouble to register a big win against Sri Lanka.

South Africa captain Faf du Plessis was a happy man as his team found a way out of trouble to register a big win against Sri Lanka in the second ODI on Thursday. (READ: Players have to value opportunities – Malinga)

South Africa registered 113-run win thanks to a combined bowling effort led by their fast bowlers. The hosts had frittered away an excellent start from opener Quinton de Kock (94) and Du Plessis (57) to be bowled out for 251 in 45.1 overs. (READ: Bowlers, de Kock hand SA big win)

The bowlers, led by Lungi Ngidi who returned top figures of 3/43, then skittled Sri Lanka for 138 in 32.2 overs with the hosts taking a 2-0 lead in the five-match series.

“I suppose from a perfect game, it was rewarding,” said Du Plessis after the match. “We probably would have wanted 40-50 runs after the start. You are not always going to bat well and put up the runs, but you need your bowlers sometimes to bail you out of trouble. The three fast bowlers in tandem was good to see. Lungi hits the bat hard and always picks up wickets. He is a massive weapon for the team.”

Playing in his second international match, Anrich Nortje also caught attention with an impressive performance that saw him taking two wickets in an unbroken spell of seven overs apart from effecting a direct hit that resulted in the run out of Kusal Mendis.

“He [Nortje] has got a huge tank to bowl 7 overs in a row and bowling them with control, good signs for us. Probably from a year or two I wanted to transition from a good player to a great player,” Du Plessis said.

Du Plessis hinted South Africa might experiment in the remaining three matches of the series having the cushion of a 2-0 lead.

“Obviously for us the vision is to look ahead. We will look at possibly making some changes and it is good we are 2-0 up, gives us an opportunity to make those changes. We have someone like JP [Duminy] to come back, so we have to see where we can fit him in, same with [Dale] Steyn,” he said. 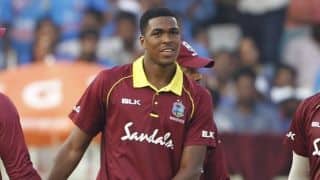