Lakmal revealed about the belief he has in himself now compared to two years back when he first toured South Africa.

Sri Lanka fast bowler Suranga Lakmal feels he is a lot more confident now than he was during his first tour of South Africa. In 2016/17, when Lakmal had first toured South Africa, he had picked up 12 wickets in three Tests, but despite having opened the bowling for Sri Lanka, the fast bowler wasn’t the senior campaigner he is now.

Lakmal, in an interview with ESPNcricinfo, revealed about the belief he has in himself now compared to two years back. Heading into the South Africa Tests, Lakmal registered five-wicket-hauls against New Zealand and Australia even though Sri Lanka lost both series. In the Durban Test against South Africa however, which Sri Lanka won, Lakmal may have had just one wicket to show for his efforts, but his probing line and length kept South Africa batsmen on their toes.

“Compared to the first time I toured South Africa, I’ve got a lot more confidence now. If you put the ball in my hand, there are no nerves any more. I am probably better at thinking about what the team needs from me, rather than just about my own performance. I’m always in touch with the captain and the coach, and I have a lot of belief now that I can do whatever it is that is needed.

“I know what the pitches are like as well, and it’s great to be able to pass that experience on to the younger bowlers, because they are a very young and inexperienced group. What I have to do now is to get another five here. I’m feeling good.”

Lakmal was no shortage of praise for his seam-bowling partner Vishwa Fernando, who grabbed a match haul of eight wickets. That South Africa were kept to modest totals in both innings was mainly due to the left-arm seamer, which as Lakmal puts it, is something Sri Lanka were looking for.

“We had actually been desperately needing a left-armer in the team,” Lakmal said. “When you have a left-armer, your combination is very different. In the last little while, we played with three right-handers, and you’ve all got the same angle and pace. Lahiru Kumara was the only one who had a bit of extra speed.

“Vishwa is massively important for the other bowlers in the unit as well, because of that angle he creates. When he plays, at least one of us in the unit can bank on getting wickets, because the batsmen have to constantly adjust to the angle, and it’s tough. He’s got the chance now, and I’m sure he’ll continue in the same way. His bowling in that Test was very special. If he can be as threatening as he was to the opposition, it’s because he’s got a lot of talent.” 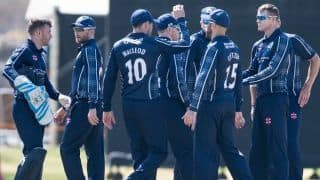 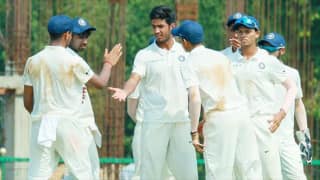