Sri Lanka reduced South Africa to 398 for 8 at lunch, thanks to Nuwan Pradeep s four-for in the first session.

Sri Lanka reduced South Africa to 398 for 8 at lunch on Day Two of the third and final Test at Johannesburg s New Wanderers Stadium, thanks to Nuwan Pradeep s four-for in the first session. For that matter, he was wicketless when South Africa were four down. Making full use of the conditions, Pradeep bowled in the corridor of uncertainty, dismissing the likes of Hashim Amla and Faf du Plessis, among others. Nonetheless, there are chances of rain-interruption today as well as tomorrow. Hence, Quinton de Kock, along with Wayne Parnell at the other end, will look to add as many runs before their bowlers go flat out to dismiss the visitors twice and finish 3-0.

Duanne Olivier, the night-watchman, gave his best to edge the ball. There were oooohs and aaahs echoing across the ground. Sri Lanka bowled with discipline on a pitch with a tinge of green, taking full advantage of the breeze.

Meanwhile, Amla kept leaving the ball. He dropped his wrist when the ball moved late, making sure it does not fly in the air. He stood rock solid.

Sri Lanka were then rewarded with a wicket. Olivier, while trying to drive an away-going delivery, edged one behind the wicket. He stood his ground, suggesting he had not nicked the ball. The Sri Lankans, however, were confident, eventually deciding to go upstairs (not literally) for a review. Slow motion revealed a faint edge, and thus Sri Lanka drew first blood on Day Two.

Meanwhile, Amla, taking a leg-stump guard, shuffled to off-stump, leaned forward, and drove one down the ground, but could manage only three, still waiting for his first boundary of the day.

Kusal Mendis then dropped du Plessis (then on 1) at first slip. Not happy, Nuwan hit Faf on the lower abdomen.

Meanwhile, Amla, taking a leg-stump guard, shuffled to off-stump and let some more deliveries go. When they pitched in line, he played with soft hands, eliminating the threat of late movement carrying an edge to the slips.

Pradeep, who was wicketless until then, dismissed du Plessis for 16. This time Mendis made no mistake in the slip cordon.

Meanwhile, Amla, was unbeaten on 132.

In came Temba Bavuma. He survived the first delivery, leaving it alone. Pradeep then bowled a fuller length, teasing Bavuma to push it to off. Bavuma, falling into the trap, edged it to the third slip and went for a second-ball duck.

Pradeep ran in hard, angled in and, swung it away from the right-handers. What was most commendable was his variation his length that left the batsman in two minds throughout the session.

Amla, looking for his first boundary of the session, tried to drive only to edge it behind the wickets to Dinesh Chandimal, who dove to his right and plucked a one-handed stunner: since the ball was angled in, Chandimal initially triggered his movement to left. But as the ball moved the other way, Chandimal, on his right leg, moved at the last moment to pouch a ripper. He then added South Africa in further trouble, dismissing Vernon Philander for a duck. 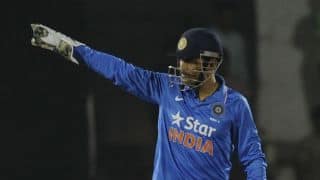 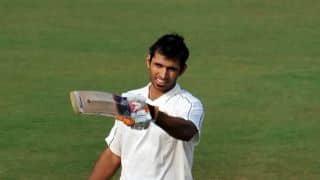