South Africa will undoubtedly go into the series as favourites.

With the three-match T20I series going 2-1 in favour of the visitors, West Indies, South Africa will be keen to assert themselves in the 50-over format. The series will hold tremendous value for both teams as it is the last dose of competitive cricket prior to the ICC World Cup 2015.

Going by their performances over the last year or so, South Africa will undoubtedly go into the series as favourites. But their most recently concluded ODI series in Australia gave them a harsh reality check as Australia crushed them 4-1. On account of that, it is unlikely that South Africa will get complacent against West Indies.

Barring that tour of Australia, however, South Africa have been dominant in ODI cricket.  On their tour of New Zealand, they won two matches in the three-ODI series, with the third being washed out. Before that they eclipsed Sri Lanka in Sri Lanka by a two-one margin. Turn the clock back further, to the tri-series in Zimbabwe, involving Zimbabwe and Australia, South Africa displayed utter dominance and beat Australia in the final with consummate ease..

In the bowling department, Dale Steyn is the leader of the wicket-hungry pack. Morne Morkel and Vernon Philander have an amazing knack to pick wickets as well. Off-spinner, Imran Tahir has had a rather impressive run in the ODI format with 47 wickets from the 27 ODIs at an average of 21.17.

With all their strengths, South Africa will still be extremely wary of the West Indians as they have some amazing players in their ranks. West Indies biggest enemy has been inconsistency and most players have been engulfed by the epidemic. The West Indian players to a large extent have failed to harness their potential to the optimum.

The team has further been marred by constant disputes with their board, usually payment related. In fact the exclusions of Dwayne Bravo and Kieron Pollard from the ODI squad for the series and the World Cup may be a direct result of one such dispute. The same dispute saw the West Indies tour of India curtailed to a four-match ODI series in place of a five-match series (one of those four matches was cancelled due to cyclone), with the Test series completely scrapped from schedule.

The West Indians have been in terrible form in ODIs, with their sole bright spot coming against Bangladesh in a 3-0 whitewash. In the three matches of their tour to India they lost 2-1. Prior to that, they even lost to England by same measure at home.

West Indies will rest majority of their batting hopes on Chris Gayle who was in destructive form in the T20I series. Jason Holder, the newly appointed skipper will hope that Chris Gayle and Marlon Samuels perform well in the ODI series. His first assignment as ODI-skipper is extremely challenging and he will hope to come out on top of it. 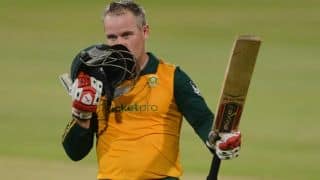