Rookie pacer Sheldon Cottrell is being tipped to be a surprise element for the West Indies in the three-match Test series starting Wednesday here.

The 25-year-old has played just one Test but recent spells in the West Indies Cricket Board (WICB) Professional Cricket League (PCL) and an explosive five-wicket burst in last week’s three-day tour match, have raised hopes of the left-armer playing a key role in the tourists’ attack, reports CMC.

“Left-arm quick bowlers don’t come often and he is somebody we need to nurture and take along with us as long as possible,” chief selector Clive Lloyd told reporters here.

“He could be very lively. On these pitches here, if he swings it and bowls as well as he has been bowling, he could give batsmen some trouble.”

His single Test has come against India in Kolkata last year when West Indies were hammered 0-3 in that series. He has, however, remained in the selectors’ frame and they have kept him involved on A-team campaigns.

Concerned about his fitness following an injury on the recent Sri Lanka A tour, selectors asked him to delay his departure with the rest of the squad to South Africa and play in the fourth round of the PCL for Jamaica.

He subsequently blew away Trinidad and Tobago with a five-wicket haul in the first innings to set up victory for his side.

“I watched Sheldon Cottrell play a game in Trinidad the other day. We asked him to play that game because we wanted to see how fit he is,” Lloyd explained.

“He is always very enthusiastic and being a soldier, I think he is fit enough and he wants to play.”

Cottrell could take the final fast bowlers’ spot in the Windies attack, with senior seamers Kemar Roach and Jerome Taylor expected to share the new ball.

Lloyd expects combative left-armer Sulieman Benn to carry the burden of the spin attack, and believes the Barbadian will be an asset for the side overall.

“I think we would play Sulieman Benn,” said the former West Indies captain.

“He is our best spinner, he has got a lot of experience and he tends to get the team going. He too is very enthusiastic and looks ready for the challenge ahead.” 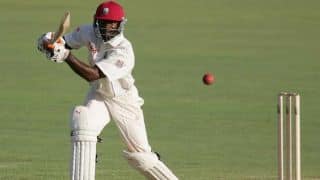 Clive Lloyd: It is the younger batsmen I want to see take this opportunity.