Marlon Samuels makes his way in while Kraig Brathwaite continues to bat on 33.

West Indies batsmen, Devon Smith and Leon Johnson were dismissed for 22 and a golden duck respectively against South Africa in the second of the three-match Test series at St. George’s Park in Port Elizabeth on Sunday. Both were dismissed by Morne Morkel who made them getting caught by Hashim Amla and Faf du Plessis respectively while West Indies’s score read 55 for the loss of two as Marlon Samuels makes his way in while Kraig Brathwaite continues to bat on 33.

Earlier, West Indies had won the toss and elected to field first as South Africa declared on 417 for the loss of eight. South Africa already lead the three-match series by 1-0 after West Indies slumped to a defeat in the first Test at Centurion by an innings and 220 runs. 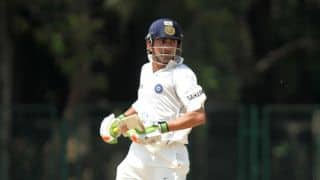