The strongly-built Cottrell took five for 16 as the Invitation team were bowled out for 125.

Left-arm opening bowler Sheldon Cottrell staked a claim for a place in the West Indies team for next week’s first Test against South Africa with a devastating opening spell on the first day of a three-day match against a South African Invitation XI at Willowmoore Park on Wednesday.

The strongly-built Cottrell took five for 16 as the Invitation team were bowled out for 125.

Devon Smith and Marlon Samuels then put the tourists in a dominant position with an unbeaten third wicket stand of 182 as the West Indians reached 217 for two at the close of play, a lead of 92.

Smith, a late replacement for the injured Chris Gayle, made 83 not out, while Samuels hurried to the first century of the tour, hitting an unbeaten 103 off 102 balls with 19 fours.

Cottrell, 25, whose only Test appearance was against India in Kolkata in November 2013, claimed the first four wickets, dismissing Gihahn Cloete, Dominic Hendricks, Keegan Petersen and Jerry Nqolo to have the Invitation team reeling at 48 for four.

Without addition to the score, Stiaan van Zyl was caught off Jason Holder for 23.

Van Zyl is expected to replace the injured JP Duminy in the South African team for the first Test, starting at Centurion on December 17.

Cottrell was rested after taking four for 16 in six overs, then needed only one Cricketball to wrap up the innings when he bowled top scorer Aviwe Mgijima for 35.

The Invitation team chose to bat in overcast conditions following overnight rain. It is the only warm-up match for the West Indians ahead of the three-match Test series.

It does not have first-class status. Captain Denesh Ramdin said he planned to use all 15 players in his squad during the match. 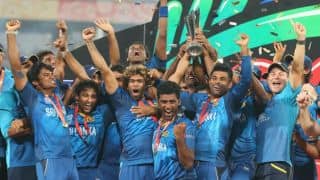 Sri Lanka cricket board signs a 3-year deal with Hameedia 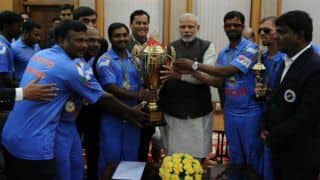