Having lost out in the semi-finals last year, South Australia Redbacks are banking largely on Shaun Tait's scorching pace in the upcoming Champions League Twenty20 which starts on Monday. 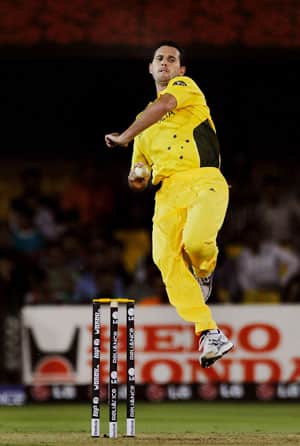 Having lost out in the semi-finals last year, South Australia Redbacks are banking largely on Shaun Tait’s scorching pace in the upcoming Champions League Twenty20 which starts on Monday.

The Redbacks will kick-start their campaign on September 25 at the Eden Gardens in their group B encounter against the Warriors of South Africa who eliminated during the last edition.

Coach Darren Berry, who arrived with a 16-member squad, was confident that the team’s pre-season had been solid and he expected the team to progress deep into the tournament.

“Our preparation has been outstanding, we have had every opportunity to prepare, but there are some really good sides in this competition,” Berry said.

Also a director of coaching with the Rajasthan Royals in IPL, Berry said the tearaway pacer Tait will be a key to their success.

“We are happy to have Tait in the side. Tait along with Lasith Malinga and Dale Steyn are three men with x-factor in world pace bowling at the moment. We expect him (Tait) to do well in Indian conditions.”

Adapting to the Indian conditions will be the key, he said.

“We have got good spinners and pacers. Five of us have got experience in IPL. Our players can adapt well to the conditions here,” Berry said.

On batting, Berry said they would certainly miss the services of top-order batsman Aiden Blizzard and West Indian big hitter Kieron Pollard who are back in Mumbai Indians fold.

“We will miss them. But we have Tom Cooper. He is a promising Twenty20 player. Plus Klinger is an experienced campaigner. We have got a balanced side,” the coach said.

Captain Michael Klinger said he was looking forward to having a couple of warm-up games before the real action begins next weekend.

“We are pretty confident we can go over there and give it a good shake, and win the tournament.”

If Tait will be the pace spearhead, Nathan Lyon, a 23-year-old promising offie will be the one to watch out for.

He has seen a remarkable rise from being a groundsman at the Adelaide Oval.

He was spotted by the Redbacks coach before making his debut against Sri Lanka in the first Test in Galle where he returned with a five wicket haul including the prized-scalp of former skipper Kumar Sangakkara off his first delivery.

He will join the team after their ongoing third Test that concludes on September 20. 23-year-old leg-break bowler Adil Rashid and left-arm orthodox spinner 29-year-Aaron O’Brien are the other spinners.

While top seven teams of the continents have made the main draw, six other teams will compete in a qualifying round beginning in Hyderabad on September 19.

Three teams from the qualifying round will join the seven teams for the main round to be held in Kolkata, Bangalore and Chennai from September 23.

The semi-finals are scheduled in Bangalore (October 7) and Chennai (October 8) which will also host the summit clash on October 9. (PTI)

Ruhunu look up to Sanath Jayasuriya for inspiration in CLT20

Jagdale favourite to take over as BCCI secretary