South Zone trounced Central Zone by 116 runs in the Deodhar Trophy quarter final at Mumbai on Saturday. After a fantastic century from Baba Aparajith and a belligerent 74 from Karun Nair helped South Zone to a commanding total of 296 for nine, their bowlers ensured that Central Zone were never quite in the hunt.

Central Zone, arguably one of the best bowling sides of the tournament, were clearly lacking in the batting department. In the absence of the talismanic Naman Ojha, Central struggled to find a batsman who could bat through the innings, as their highest scorer was No. 7 Arjit Gupta, who scored the only half-century of the innings.

Central got off to a horrendous start, losing Jalaj Saxena, Jitesh Sharma, and Ashok Menaria with just four runs on the board. Opener Mukul Dagar and No. 5 Anand Bais then added a crucial 59 runs, but Central were soon reduced to 149 for eight after the batsmen kept losing their wickets. Vinay Kumar was sublime, taking three wickets for just eight runs in six overs.

Earlier, after three early wickets, South were in a spot of bother at 88 for three. Perhaps the best batting side of the tournament, South were in trouble at 88 for three before Aparajith and Nair added 124 runs in quick time for the fourth wicket. With as many as four Karnataka batsmen in the top five, Aparajith was the only Tamil Nadu batsman in the top six. However, he proved proved his worth by working hard for his runs at the start. His partnership with Nair was characterised by frequent boundaries. Nair was the aggressor, but Aparajith ensured that he kept up his pace as well, as South reached 212 in the 39th over before Nair was dismissed for 74.

Sanju Samson did not last long, perishing in the quest for quick runs when he pulled Jalaj Saxena to Ishwar Pandey in the deep. Sachin Baby came in at No. 7 and boosted the run rateas well. Aparajith soon got to his century, and continued playing the big its at will. He was finally out in the 47th over to a tired slog, holing out to Mukul Dagar in the deep off Saxena.

South lost a bunch of wickets at the death, including three in the final over bowled by Pankaj — who took five — but still managed to end with a commanding total. It will require a particularly good chase from Central to pull off a win. 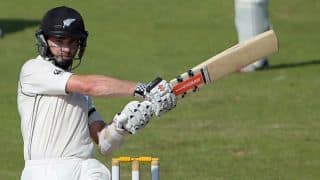