West Indian captain Darren Sammy believes spinners will be crucial on the turning wickets at the World Cup, tipping his own slow bowlers to have a major impact 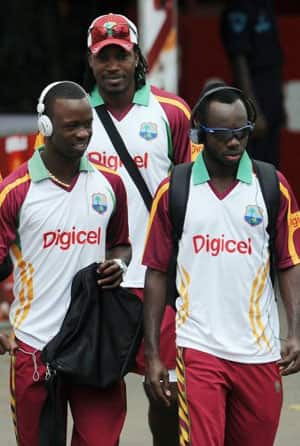 West Indies players ahead of the World Cup

West Indian captain Darren Sammy believes spinners will be crucial on the turning wickets at the World Cup, tipping his own slow bowlers to have a major impact.

The West Indies have left-armer Sulieman Benn, right-arm off-break bowler Chris Gayle and left-armer Nikita Miller in their squad for the tournament in India, Bangladesh and Sri Lanka. “Spin will be effective during the tournament,” said Sammy, citing the examples of the warm-up matches leading up to the main tournament.

“If you had a close look at the warm-up matches you would see the ball was turning and the slow bowlers all did a good job. We have two specialist spinners in Benn and Miller and they are bowling really well at the moment for us, so we expect them to play a major part,” he added. Benn was among the wickets in the West Indies’ defeat in their warm-up match against Sri Lanka on Tuesday and Sammy backed him to shine.

“Benn bowled well against the Sri Lankans and is an asset. He has been taking wickets and that is always a good sign for your spinner. Miller was outstanding when he got the opportunity against the Kenyans. “Miller is also one of our better fielders and offers a lot to the team. Gayle has done a good job in all forms of the game for us as well and we can call on him to deliver with his off-breaks in this tournament as well.”

Sammy said the warm-up matches had been useful for his team, traditionally known for their pace attack. The West Indies open their World Cup campaign with a tough match against South Africa in Delhi on February 24.

Former Pakistan off-spinner Saqlain Mushtaq has also underlined the importance of slow bowlers. “India have quality spinners and that’s why they won both their warm-up matches and teams with quality spinners will definitely have the edge on other teams and in this department Australia will struggle,” said Saqlain.

Kevin Pietersen the opener - the cure for England's ills?