Sreesanth will be accepted in the Kerala team with open arms, says Senior Coach P Balachandran

Sreesanth will be accepted in the Kerala team with open arms, says Senior Coach P Balachandran

Kochi: With the Delhi Patiala House court clearing former Indian pace bowler Sreesanth of all charges in the Indian Premier League (IPL) 2013 spot-fixing scandal, Kerala Ranji Trophy team senior coach P.Balachandran on Saturday said the cricketer will be accepted with open arms. “See, I just cannot say of any technical hitches, but the moment the BCCI lifts the ban, we will accept him with open arms. We have been told that he has been maintaining his fitness and hence it’s just a question of getting into the ground and bowling,” added Balachandran. READ: IPL 2013 spot-fixing scandal: Charges against Sreesanth, Chandila and Chavan dropped

BCCI vice president and Kerala Cricket Association (KCA) president T.C. Mathew said he will be sending a mail to the Board of Control for Cricket in India (BCCI) office-bearers about the Delhi court exonerating 32-year-old Sreesanth.

“The former Delhi Police Commissioner is also an office-bearer of the IPL and may be the BCCI will seek his opinion. The moment we get to hear from BCCI clearing him, he will be asked to get ready for cricket. We are having a few tournaments that are currently on and the only thing we are waiting for is the clearance from the BCCI,” said Mathew. READ: Charges dropped against Sreesanth, Chavan and Chandila: What lies ahead?

Kerala cricketer Sony Cheruvathur said this was a verdict that was expected. “I knew Sreesanth, that he can never do a thing that was charged on him. Sreesanth’s character is such that he is always brutally frank. He can easily return because he was always maintaining his fitness,” said Cheruvathur. Now all eyes are on the Delhi police on what their future course of action is going to be and also the BCCI. READ: Sourav Ganguly happy with court’s decision to pardon S Sreesanth, Ajit Chandila, Ankeet Chavan 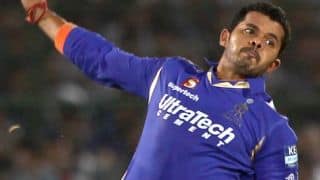 Sreesanth: Want my daughter to know me as cricketer, not terrorist